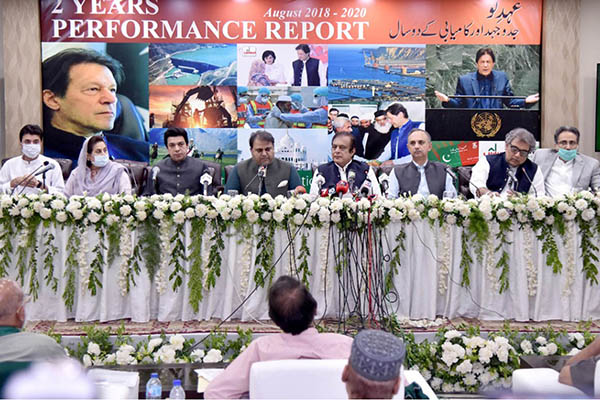 In briefing, information minister claims good news for the public is ‘bad news’ for the opposition

Members of the federal cabinet on Wednesday reiterated allegations that the opposition was attempting to spread chaos and despite as they addressed a second press conference to brief the public on the Pakistan Tehreek-e-Insaf’s performance after two years in power.

“It is our democratic duty to inform people about our performance,” said Information Minister Shibli Faraz, as he alleged that the opposition parties were adopting “fifth generation warfare” tactics to sow frustration and despair among the public. “People are with us. We will thwart all conspiracies. The good news for the nation is actually bad news for the opposition,” he said. The PTI-led government routinely blames the opposition for its policy failures and has repeatedly suggested it is being “held hostage” by various “mafias.”

Faraz said the prime minister had vowed not to spare any “mafia,” adding the rule of law would be ensured.

Communications Minister Murad Saeed claimed his ministry had undergone a complete overhaul under the PTI. He claimed it had saved around Rs. 750 million through an austerity drive. In addition, he said, the implementation of an electronic billing system had helped recover Rs. 12.56 billion by overcoming irregularities.

As per routine, Saeed took aim at the previous governments of the PPP and PMLN by claiming they had not initiated any public-private partnerships, adding that in the past two years agreements had been inked with 1,500 big and small brands to mobilize the e-commerce sector.

Claiming that the people’s trust in the postal services was on the rise, he said the sector’s revenue had risen from Rs. 10 billion to Rs. 18 billion in the past two years. Similarly, said Saeed, the National Highway Authority had increased its revenue from Rs. 53 billion to Rs. 103 billion and claimed the motorway police’s response time had been reduced from seven to two minutes.

Inter-Provincial Coordination Minister Fehmida Mirza said the government had summoned a Council of Common Interests session within its first 30 days, adding that it would soon have its own secretariat. She claimed a federal coordination committee for sports had also been tasked with projecting a softer image of the country through “sports diplomacy,” adding the number of Pakistan Sports Board members had been reduced to 11 under the austerity drive.

Water Resources Minister Faisal Vawda claimed the government would build 112 small dams and that the Diamer-Bhasha Dam would change the face of the country. Admitting that the issue of Indus Water security persisted, he said the government was also focused on resolving Sindh’s water crisis.

Energy Minister Omer Ayub claimed the country’s biggest pending challenge was reducing dependence on imported oil and enhancing the share of indigenous resources, including renewable and hydroelectric power to 70 percent by 2030. He claimed the cost of renewable energy generation had been cut down to 3.75 cents per units compared to between 12-13 cents per unit in the past.

Maritime Affairs Minister Ali Zaidi said the prime minister had approved a marine service company and big changes would be introduced at Karachi’s Port Qasim. Of the Blue Economy plan, he claimed it has a global value of $23 trillion. He also said that fish processing plants would be installed and loans given to fishermen under the Kamyab Jawan program.

Special Assistant to the P.M. on Petroleum Nadeem Babar was also present at the press briefing.