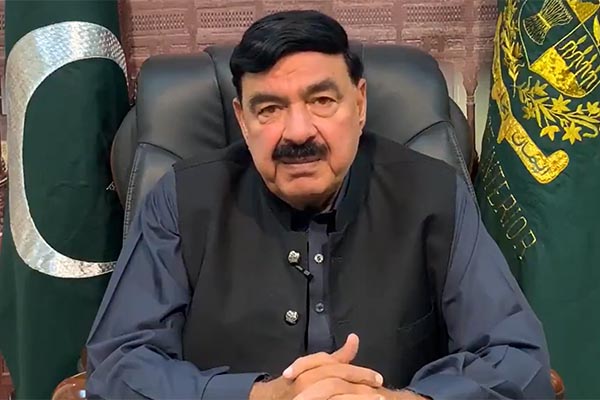 Interior Minister Sheikh Rashid Ahmed on Wednesday said the federal government will take all necessary steps to protect the lives and property of citizens of Karachi, stressing that maintaining law and order in the Sindh capital was imperative for the national economy.

While being briefed on the law and order situation of Sindh at the Rangers Headquarters in Karachi, he lauded the paramilitary squad for the steps taken by it to maintain law and order. “Karachi is the backbone of the Pakistani economy, we will ensure that law and order prevails therein,” he was quoted as saying. He said the role played by the Sindh Rangers for maintaining law and order in Karachi was commendable. “We will take all necessary steps to protect the lives and property of the people,” he added.

In a press conference after the meeting, Rashid sought to dismiss speculation about the federal government taking over administrative control of Sindh. Denying that the federal government had any intent to take a direct role in restoring law and order in rural Sindh, he noted that if a “bloodbath-like situation” developed, the center could not stay ambivalent and any final decision rested with Prime Minister Imran Khan.

“The decision would only be of Imran Khan,” he said. “I am here only to meet security agencies that include Rangers and the FC [Frontier Constabulary]. I am also seeing Murad Ali Shah in the morning [today]. I would meet all of them but be clear—I am not here to interfere in anyone’s affairs,” he added.

The interior minister is in the Sindh capital on the directions of Prime Minister Imran Khan, who took notice of a “worsening law and order situation” following a meeting with Planning Minister Asad Umar and Sindh Governor Imran Ismail. According to Information Minister Fawad Chaudhry, both leaders had conveyed to Khan their concerns over Sindh’s administrative mismanagement, especially the law and order situation, and the rising level of crime in the province. He said Rashid had been tasked to meet all law enforcement agencies and develop a viable plan of action in response to the situation.

The Sindh government, meanwhile, has claimed that it is fully capable of handling the law and order situation without any federal involvement. PPP Chairman Bilawal Bhutto-Zardari, whose party rules the province, told media that he was “satisfied” with the law and order situation of the province, adding that police had helped improve it in recent years.

“Sindh police have the full potential to restore peace in the province,” he said, as he lashed out at the interior minister over his failure to ensure the protections of journalists in the federal capital.

A surge in criminal activity in Sindh has raised concerns about the law and order situation in Sindh among citizens. Two policemen were among at least nine people who were shot dead during a clearance operation in Shikarpur district earlier this week, while seven policemen, including two SHOs, were injured on Sunday. Earlier this month, nine people were killed when armed men opened indiscriminate fire on members of a rival community in a village in the Kandhkot area.