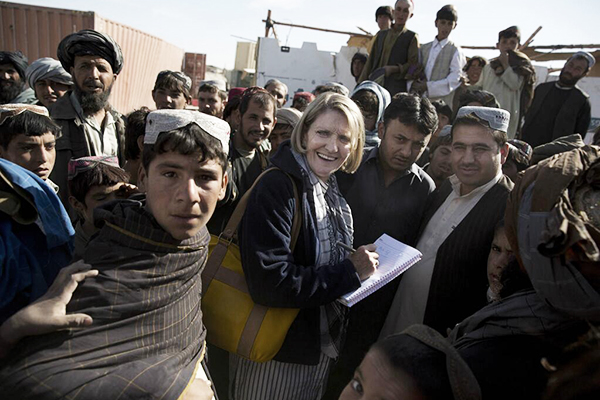 Journalist Kathy Gannon, who was injured during a shooting in Afghanistan’s Khost province. Twitter

An Afghan police commander on Friday shot dead a female German photographer working for the Associated Press on the eve of presidential elections, in an attack that also left a Canadian colleague wounded, the news agency and officials said.

The journalists were shot in their car in the Tanai district of Khost province, in the country’s east, as they reported on distribution of ballot papers for the election to choose a successor to President Hamid Karzai.

The incident comes as Afghanistan undertakes a massive security operation to protect voters and polling officials, after the Taliban pledged to disrupt Saturday’s ballot with violence.

Anja Niedringhaus is the third journalist working for international media to be killed in Afghanistan during the election campaign, after Swedish journalist Nils Horner and Sardar Ahmad of Agence France-Presse.

“Anja Niedringhaus, 48, an internationally acclaimed German photographer, was killed instantly,” AP said in a report from Kabul. “Kathy Gannon, the reporter, was wounded twice and is receiving medical attention. She was described as being in stable condition and talking to medical personnel.”

AP said the police commander opened fire while the two journalists were in their car, traveling with election workers delivering ballots in Khost city. “As they were sitting in the car waiting for the convoy to move, a unit commander named Naqibullah walked up to the car, yelled ‘Allahu Akbar’ and opened fire on them in the back seat,” the news agency said. “He then surrendered to the other police and was arrested.”

Khost provincial governor Abdul Jabbar Naeemi and other officials confirmed that the attacker was a police commander who was detained immediately after the incident.

“Anja and Kathy together have spent years in Afghanistan covering the conflict and the people there,” said AP Executive Editor Kathleen Carroll in the AP report. “Anja was a vibrant, dynamic journalist well-loved for her insightful photographs, her warm heart and joy for life. We are heartbroken at her loss.”

Kabul has been rocked by a string of high-profile attacks in the run-up to Saturday’s election, which will be the first democratic handover of power in Afghanistan’s turbulent history.

Ahmad, AFP’s senior Afghan reporter, was killed along with his wife and two of his three children on March 20 when gunmen smuggled pistols into Kabul’s high-security Serena hotel and shot dead nine people including four foreigners. Horner, 51, a veteran of Swedish national radio, was shot dead in March in a Kabul street while researching a story about a January attack on a nearby restaurant which killed 21 people, including 13 foreigners.

In addition to Horner’s murder and the Serena assault, a charity’s guesthouse has come under attack, along with offices of the Independent Election Commission (IEC). Most recently, six police officers were killed in a suicide bombing at the interior ministry in Kabul on Wednesday.

Security was tight across Afghanistan ahead of the vote to elect a president to take over from Karzai, who is constitutionally barred from standing again. Interior Minister Omar Daudzai said all 400,000 of the country’s police, army and intelligence services have been deployed to ensure security around the country.

There was a heavy police presence on the largely deserted streets of Kabul on Friday morning, with officers carrying out stringent checks on vehicles. The Taliban have pledged to attack the poll, urging their fighters to target election staff, voters and security forces.

Former World Bank economist Ashraf Ghani, Abdullah Abdullah who was runner-up in 2009, and former foreign minister Zalmai Rassoul are the leading contenders in the eight-man race. In a pre-election address on Thursday, Karzai urged voters to turn out and make the vote a “national celebration of mass participation.”

A repeat of the bloodshed and fraud that marred the 2009 election would damage claims by international donors that the multi-billion-dollar, 13-year intervention in Afghanistan has made progress in establishing a functioning state system. Whoever wins the race to succeed Karzai faces a testing time maintaining stability as Afghan forces take on the fight against the resilient Taliban insurgency without the aid of NATO forces. The U.S.-led coalition is due to withdraw its 53,000 combat troops from Afghanistan by the end of the year.