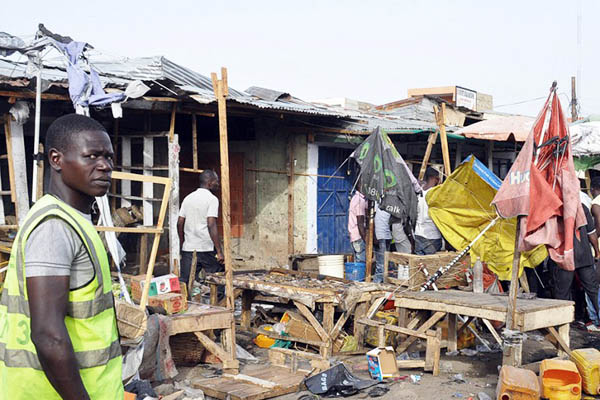 Rescue workers at the site of a March 10, 2015, suicide blast in Maiduguru. Olatunji Omirin—AFP

At least seven killed and 31 others injured in attack on bus station that has been targeted several times in the past.

A girl about 12 years old carried out a suicide attack at a bus station in northeastern Nigeria on Saturday, killing seven and injuring 31, witnesses said, shortly after officials revealed that Boko Haram Islamists had recaptured a strategic town in the region.

“A girl aged about 12 detonated an explosive under her clothes as she approached the station’s perimeter fence,” said Danbaba Nguru, a shopkeeper who witnessed the attack in Damaturu. The head of the local Sani Abacha hospital, doctor Gara Fika, said six bodies and 32 injured had arrived there with one person dying after being admitted.

The Damaturu bus station has been repeatedly targeted in a string of previous suicide attacks.

“I was in the station when I saw the young girl arrive,” said bus driver Musbahu Lawan. “I think she noticed the guards checking people at the gates and she decided to detonate the explosives in the middle of the crowd outside the gates.” Nguru added: “The road leading to the gates is always full of small traders… I was lucky not to have been hit.”

No claim of responsibility for the attack has been made but Islamist group Boko Haram has frequently used young girls to carry out suicide attacks. In February, a woman suicide bomber attacked the same bus station, leaving seven dead and 32 injured.

The deputy governor in neighboring Borno state, Mustapha Zannah, said Friday that he had seen a security report indicating that Boko Haram has recruited several suicide bombers to help counter a regional military operation against them. And on Saturday Zannah announced the fall of Marte, located on a strategic trading route between Nigeria and neighboring Cameroon and Chad, to the Islamists.

“It is sad as we have been made to understand that Marte has today completely fallen under the control of the insurgents, which to us is a very huge setback,” he said. The town has changed hands between the jihadists and government troops numerous times since 2013.

A regional military coalition of Nigeria, Niger, Chad and Cameroon has claimed a series of major victories against Boko Haram since launching sweeping offensives against the jihadists in February. But the Islamist fighters, who recently pledged allegiance to the Islamic State extremists controlling swathes of Iraq and Syria, have been pushing back.

The jihadists killed at least 55 people in two raids on villages near Maiduguri, the first assault on the northern city in three months. “Even if 90 percent of our communities have been liberated, the war is not yet over,” Zannah cautioned early Saturday.

Boko Haram’s six-year insurgency has claimed some 15,000 lives and displaced about 1.5 million people.

Criminals behind Karachi University Bombing Will be brought...