Home Lightbox Fighting for the Right to Live

Fighting for the Right to Live 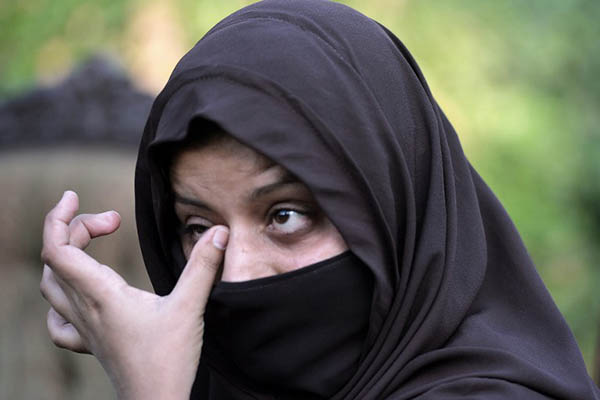 “Are these the people with bullets who took my papa away?” two-year-old Sabiha Ahmad asked her mother anxiously when AFP visited her family, members of Pakistan’s persecuted Ahmadi minority, who are currently living in hiding.

The toddler’s family has had little contact with anyone since they were forced to flee for their lives on Nov. 20 when hundreds of people torched a factory in Jhelum after rumors spread workers were burning copies of the Quran.

Sabiha’s father Asif Shahzad was one of the Ahmadi employees—a minority group who are legally declared non-Muslims in Pakistan in 1974—and that night the mob took him away.

“I begged them for the life of my wife and children and they freed them only after taking me to burn in the factory’s boiler,” he told AFP this week from where his family is hiding. “It was my good luck that some kind-hearted Muslims helped me to escape,” he said.

His wife Hafsa said she had almost accepted him dead. “I never wanted to leave him but he said that he would join us if he survived, and I must save mine and our daughters’ lives,” the 24-year-old told AFP tearfully.

Along with other Ahmadi families fleeing Jhelum that night, Hafsa managed to escape in a car her husband had arranged before he was torn away by the mob. The driver, she said, was Muslim. “[He] treated me and the other ladies… as his daughters,” she said, navigating them through the mob to safety.

Hardline Islamic scholars denounce Ahmadis as heretics, describing their beliefs as blasphemy—a hugely sensitive issue in Pakistan, where even unproven allegations stir mob lynchings and violence. The largest Ahmadi community in the world is in Pakistan, where they number about 500,000, and followers are frequently the target of blasphemy allegations by hardliners tacitly supported by what the community says are discriminatory laws.

Legislation framed in 1974 and 1984 under pressure from hardliners, bans Ahmadis from calling themselves Muslims and practicing the rituals of Islam. Even voicing the Muslim greeting “Peace be upon you” could see an Ahmadi thrown in prison for three years.

“Ahmadi Muslims in Pakistan face daily harassment, intimidation and persecution on the basis of their religion,” Dennis Jong, the co-chair of a European Parliament body on religious tolerance, said in a press release this week slamming the factory attack. The attacks, he said, “show the continued lack of protection of the human rights and fundamental freedoms offered by the Pakistani government to the Ahmadis.”

In July 2014, a mob, in echoes of the attack in Jhelum, burnt three Ahmadis alive and torched their homes in Gujranwala in Punjab province. “Locals hated us for our religion,” said Mubashira Jarri Allah, who was caught up in the violence. “[They] torched our house after a false allegation of blasphemy. I lost my mother, two nieces and my unborn child,” she said. She was eight months pregnant at the time.

In May, tensions rose in the district of Chakwal when the minarets and dome of an Ahmadi place of worship were demolished after a court ruled that it looked too much like a Muslim mosque.

Officials at the Jamat-e-Ahmadiya, an umbrella organization of Ahmadi groups, say the state itself sponsors their persecution. “We don’t even vote in elections because if we declare ourselves Muslims, we will be prosecuted,” said Saleemud Din, a spokesman for Jamat-e-Ahmaidya.

The state, for its part, says Ahmadis—like all minorities in Pakistan—are “constitutionally protected.”

“When legislation was formed about the Ahmadis, the law was passed after complete debate in the National Assembly,” says Sardar Muhammad Yousaf, federal religious affairs minister. “The Ahmadis were given full chance to raise their point of view… If the Ahmadi community has some concerns and fears, they must come and discuss that with us and we will address them.”

In Jhelum on Nov. 20, the Ahmadi families believed they would be shown no mercy. Witnesses said hundreds of people—mostly young men and followers of local Muslim clerics who rallied them with loudspeakers—torched the chipboard factory, which was owned by an Ahmadi.

They also burnt several houses and ransacked an Ahmadi place of worship. Eighteen Ahmadi families are believed to have fled that night. “Even the best friends turned into the worst foes,” said Asif Shahzad.

PTI and Army Two Forces that are Keeping...

Newsweek, y u have not published the stories of palestine muslims, and syria muslims???

When will the atrocities stop? If you wish to declare Ahmadis non Muslim then so be it… But then why act as non Muslims yourselves with heinous crimes such as murder and torture? Be fearful of what is to come in the hereafter and stop this now!