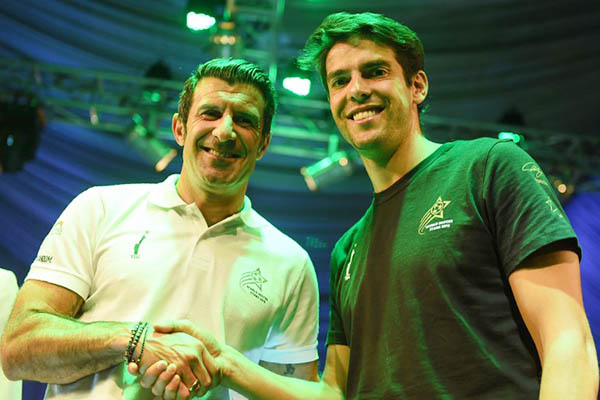 The two legends—who both played for Spanish club Real Madrid—are in Pakistan for a day-long visit as part of the World Soccer Stars tour, aimed at grooming nascent talent through exhibition matches and coaching clinics.

The 2000 Ballon d’Or winner Figo, wielding a cricket bat in a nod to the game’s popularity in Pakistan, told reporters in Karachi that he was “excited” to be there. “There is a great promise of football in Pakistan so we are here to help develop the game,” said Figo, who also played for Barcelona before retiring in 2009.

Kaka, himself carrying a cricket ball, said the pair were “committed” to promoting football globally. “We … have a good impression of Pakistan,” added the 2007 Ballon d’Or winner, who also played for AC Milan and retired in 2017.

Pakistan boasted a top 10 place in Asian football until the early 1970s, but a lack of government support and poor infrastructure have seen them sink to 199 in the FIFA rankings.

Pakistan was banned in 1995 and again in 2017 over violating FIFA’s rule that all federations must be free of any government and judicial interference in their respective countries. The most recent ban was lifted in 2018, but Pakistan is on the verge of a third strike after the head of its federation refused to accept the results of a controversial leadership election held last month.

Cricket is king in the South Asian country of more than 200 million people, which has never qualified for the FIFA World Cup. But a 2017 visit by eight international stars led by Brazilian legend Ronaldhino proved the game is gaining popularity, with younger generations adoring the likes of Cristiano Ronaldo, Lionel Messi and Luca Modric.

Figo and Kaka backed FIFA’s stance of increasing the number of World Cup teams from 32 to 48 in the 2026 event to be co-hosted by the U.S., Mexico and Canada. It means “more players and more opportunities,” Figo said, while Kaka hoped Pakistan would seize the chance and appear in the World Cup “soon.”

The two stars will also visit Lahore later Thursday, and are expected to return for exhibition matches and coaching clinics from April 23-26 this year.