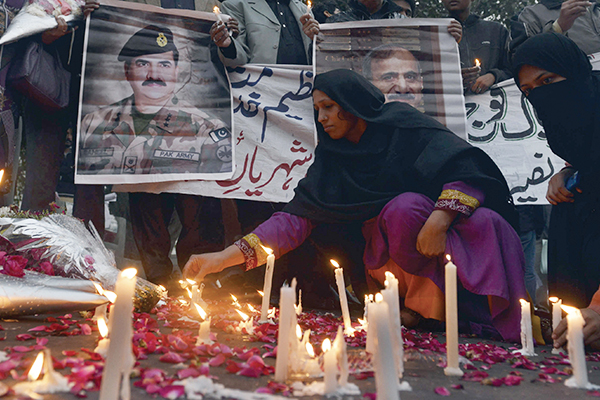 A vigil for Peshawar in Lahore, Dec. 17. Arif Ali—AFP

It took 11 minutes for Prime Minister Nawaz Sharif to recap his 11-hour-long meeting with political parties and the military brass. With a portrait of Jinnah in suit and tie hanging behind him, a grimly decisive Sharif addressed the nation at 12:20 a.m. on Dec. 25, announced he would personally command Pakistan’s war against terror, and unveiled the just-agreed, unanimously approved 20-point “National Action Plan.” This plan includes executing terror convicts, establishing special courts run by military officers for two years, going after sectarian and terrorist groups and blacking them out from the media, creating a new antiterrorism force, strengthening the counterterrorism apparatus, launching operations in the Punjab, regulating madrassahs, protecting minorities, reforming the tribal areas, hastening the rehab of the internally-displaced, and repatriating Afghan refugees. If the civil-military unity and unanimity that shaped these measures sustain, Pakistan will have truly been forever changed by Peshawar.