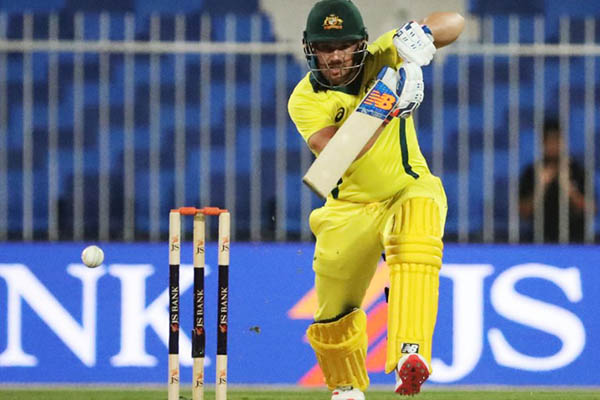 Aaron Finch struck his second century in as many games to lead Australia to another thumping eight-wicket victory over a hapless Pakistan in the second one-day international in Sharjah on Sunday.

The Australia captain smashed a 143-ball 153 not out for his 13th ODI hundred—also his highest score in ODIs—to anchor Australia’s comfortable chase of a 285-run target in 47.5 overs. Finch, who scored 116 in Australia’s eight-wicket win in the first game at the same venue on Friday, put on a solid 209-run opening wicket stand with Usman Khawaja who made a 109-ball 88 to give Australia a 2-0 lead in the five-match series.

Finch struck six sixes and 11 boundaries in a dominating innings, improving on his previous highest one-day score of 148 against Scotland at Edinburgh in 2013.

The victory came in the 100th one-day international match between the two countries. Finch admitted the start was tough.

“On a wicket like that, you can’t afford to take it too deep with new batters,” he said. “When you come in, it’s tough to quickly at first. I just wanted to get through Imad (Wasim). It’s hard to take a risk off him. I just hung in there as long as I could. Usman has been in good form, and he’s getting big runs at an important time. Things are going quite well at the moment, but there are always things to improve.”

Pakistan had replaced fast bowler Mohammad Amir with Mohammad Hasnain for rookie 18-year-old’s first one-day and that made for an inexperienced lineup, having already rested six main players for the series.

Finch and Khawaja thrived against the novice attack, with Finch striking two sixes in the final overs while Khawaja’s knock had eight boundaries.

Finch completed his hundred with a couple off Hasnain on his 97th ball, making successive hundreds for a second time in his career. He scored consecutive hundreds against England in Australia last year. Khawaja fell to leg-spinner Yasir Shah with 76 needed while Glenn Maxwell cracked two sixes in his 19 before he was run out.

Pakistan’s stand-in captain Shoaib Malik rued the lack of early wickets. “To be honest, I think early strikes in our bowling is what we are lacking,” said Malik. “Overall, there are positives as we fought until the last ball. We are testing our bench strength.”

Pakistan owed their total of 280-7, after winning the toss, to Mohammad Rizwan’s maiden century.

Rizwan, only playing because regular keeper and skipper Sarfraz Ahmed has been rested for the series, added 52 for the third wicket with Haris Sohail (34) and an invaluable 127 for the fifth wicket with Shoaib Malik.

Pakistan lost opener Imam-ul-Haq without scoring off the fifth ball of the innings from fast bowler Jhye Richardson.

Shan Masood (19) and Sohail—who scored his maiden hundred in the first game on Friday—took the total to 35 when Richardson struck again, getting Masood caught at short mid-wicket. But Richardson took 2-16 in his five overs and fell awkwardly in the outfield and left the field in the 11th over. Initial reports suggests he dislocated his shoulder and is doubtful for the remaining three matches.

Rizwan, though, lifted Pakistan after Umar Akmal fell for 16.

Rizwan improved on his previous best of 75 not out and completed his hundred with a single off 114 balls before falling to Nathan Coulter-Nile’s boundary catch. Coulter-Nile finished with 2-52.

Malik also smashed three boundaries and a six before falling in the 45th over.

The next match is in Abu Dhabi on Wednesday.