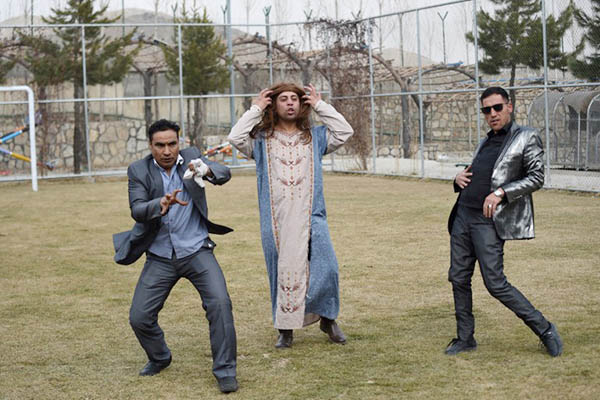 They are a thorn in the side of abusive Afghan warlords, corrupt policemen and double-dealing politicians, skewering them on television—with laughter.

Comedy can be a dangerous business in Afghanistan, but the stars of TV show Shabak-e-Khanda—or Laughter Network—are unabashed even in the face of threats of violence. Their skits calling out wrongdoing and incompetence with tongue-in-cheek nonchalance have garnered an avid following since the series first launched on Tolo Television.

A recent episode took a swipe at a senior minister who had a reputation for drifting off to sleep in official meetings. “Wazir sahib, when should I wake you up to defend the country?” the anchor crooned to a broken harmonium, reflecting public frustration over growing insecurity in Afghanistan. “You were sleeping when suicide bombers came to attack us,” he joked.

Another episode parodied a military commander who bet—and lost—a government humvee in a gambling spree. And another lampooned a policeman who was dismissed for “bacha bazi,” the entrenched practice of sexual slavery and abuse of boys.

“Through comedy we show the reality of life in Afghanistan,” said the show’s 27-year-old producer Rafi Tabee. “Comedy is funnier when there is truth to it. In a country full of tragedies, we make people laugh.”

The show is a rare uncensored voice that has built a reputation for poking the bear in the eye and speaking truth to power. And it appears to be getting more daring with each episode.

A popular target is a formidable former warlord known for his drunken misdemeanors: portrayed on the show as wearing a bandolier belt filled not with bullets but alcohol bottles. Another audience favorite was a skit showing Afghanistan’s president trying to coax another former warlord over the phone not to engage in celebratory shellfire after signing a government peace accord.

“No celebratory fire is like making Kabuli pilaf without rice,” reasons the stubborn warlord, flanked by a rocket launcher.

The line between satire and reality blurred to the point of vanishing when the show parodied a powerful M.P. whose electricity was cut off for not paying his utility bills. “If you don’t switch it back on, I will switch you off,” the M.P. is shown threatening a power company official. In reality, the lawmaker got away with not paying, the way influential strongmen in Afghanistan usually do. But sometimes the humor cuts too close to the bone. In Afghanistan’s hyper-masculine society, being laughed at is the cultural equivalent of being emasculated, the ultimate humiliation that can easily devolve into violence.

“Two armed men came to my house and said ‘You make fun of our leaders? This should be the last time’,” said Siar Matin, one of the show’s comedians. Supporters of President Ashraf Ghani also warned another star of the show, Ibrahim Abed, against mocking him. He has gained popularity for near-perfect mimicry of the mercurial leader’s sudden finger-jabbing outbursts.

“Doing comedy is as dangerous as killing a cow in India,” where the animals are worshipped, joked comedian Nabi Roashan.

But such is the power of outraged mockery that ordinary Afghans have started courting Shabak-e-Khanda’s crew to expose wrongdoings and shame inept officials. “People come to us instead of going to M.P.s with their problems,” said Siar.

Humor is also a source of solace and escapism in a country where hope is fast receding, amid a worsening conflict, rising unemployment and political dysfunction. “In Afghanistan they say laughing is a sin,” said Roashan. “But people tell us ‘you are doing the best job by making people laugh’.”

The program’s rising popularity mirrors the evolution of the media in post-Taliban Afghanistan into a feisty watchdog despite funding pressures and the ever-growing threat of violence. Most episodes feature impromptu performances without proper scripts, including a recent segment that poked fun at Afghans too coy to directly ask for condoms from a chemist.

“We laugh and perform. We perform and laugh,” said Tabee, the producer.

There is no dearth of powerful subjects worthy of ridicule. Massood Sanjer, the head of Tolo TV, explained: “People say ‘don’t do bad things or Shabak-e-Khanda will make a show on you’.”