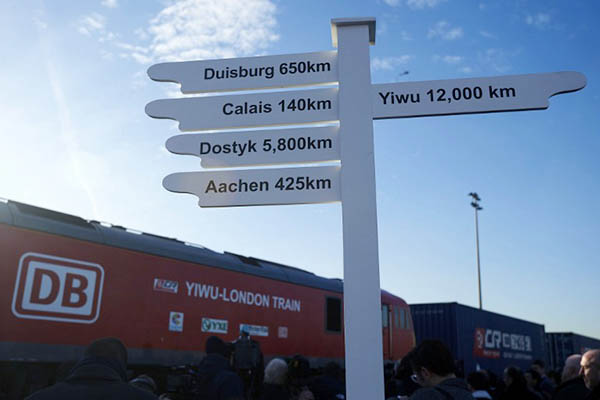 Laden with whisky and baby milk, the first freight train linking China directly to the U.K. arrived in the eastern Chinese city of Yiwu on Saturday after a 12,000-kilometre trip, becoming the world’s second-longest rail route.

The journey is the latest effort in China’s drive to strengthen trade links with western Europe along a modern-day “Silk Road” route.

“The train arrived at around 9:30 a.m. to Yiwu on Saturday,” the Yiwu Tianmeng Industry Company told AFP. The world’s top trading nation launched the “One Belt, One Road” strategy in 2013, and has since poured millions into constructing vast infrastructure links.

The train—which was also carrying pharmaceuticals and machinery—departed London on April 10 and passed through France, Belgium, Germany, Poland, Belarus, Russia and Kazakhstan during its 20-day trip before arriving in Yiwu in eastern Zhejiang province, a major wholesale center for small consumer goods.

The new route is longer than Russia’s famous Trans-Siberian railway, but about 1,000 kilometers shorter than the record-holding China-Madrid link, which opened in 2014.

London is the 15th city to be linked to a new freight network offered by the state-run China Railway Corporation, which says its services are cheaper than air transport and quicker than shipping. The journey should be 30 days faster than moving the goods by ship, the provincial government had said, but the pilot run took two days more than the 18 days expected. And the train, named the East Wind, has much less carrying capacity—just 88 shipping containers, according to the Yiwu government, compared to the 10,000 to 20,000 containers cargo ships can carry.

It is unclear how much the venture cost, and some experts have questioned whether the ambitious project makes economic sense. “It is hard to say at this stage what the economic return will be, as the economic benefits will come over a long time,” He Tianjie of Oxford Economics Hong Kong told AFP. “However, the train is in some aspects more convenient and flexible. It can make multiple stops, allowing for the pick up and offloading of cargo along the way. Rail transport is also less affected by adverse weather conditions. Therefore, there may be a role for such long-haul rail links,” he said.

China already has a regular direct freight train service to Germany, Europe’s largest economy. One route links the Chinese megacity of Chongqing to Duisburg, a steel-making town and one of Germany’s most-important transportation and commercial hubs. The other route links Beijing, the Chinese capital, to Hamburg, Germany’s second-largest city.

Prime Minister Theresa May plans to visit China later this year, with talks likely to include closer trade ties for when Britain leaves the European Union, according to British officials. “The reality is that there is nothing new here. Transcontinental rail transit has existed for over a century,” said Theresa Fallon, director of the Center for Russia, Europe, Asia Studies (CREAS) in Brussels. The launch of the new rail route was a bid to show post-Brexit Britain that there were other trade options than neighboring Europe, she said. But “this train will transport to China British socks, Scotch and soda pop—which hardly heralds a bright new age of Sino-U.K. trade.”

Roughly 80 percent of global trade is shipped by sea as freight train services face technical and bureaucratic hurdles, which vary according to country. The East Wind’s locomotive and carriages had to be changed en route because of the larger gauge on railways in the former Soviet Union.