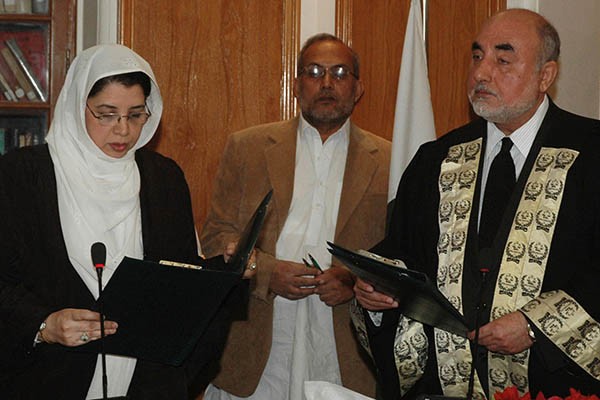 Pakistan’s national shariah court, which hears cases under the country’s Islamic legislation, on Monday appointed a female judge for the first time in its 33-year history.

Ashraf Jehan, 56, who was serving as an additional judge at the Sindh High Court, made history as she took the oath in Karachi. “It was a historic oath-taking ceremony today when an able lady judge had joined the Shariat Court,” said Agha Rafiq Ahmed, the chief justice of the Federal Shariat Court of Pakistan.

The court was established in 1980 during the rule of military dictator Zia-ul-Haq as part of sweeping Islamization of Pakistan’s institutions. It examines the country’s laws to check them for conformity with Islamic injunctions and hears appeals under the religious Hudood Laws, which run parallel to the penal code.

“There was no bar in the Constitution to make a woman the judge of Shariat Court and there is no discrimination between men and women,” Ahmed said.

The chief justice of the Shariat Court, who rarely speaks to the media, said he was pleased to comment on an historic moment. “I took the initiative as it would send the message in the world that we are enlightened people and would dispel many misconceptions,” he said.

I had the honour to work with Honorable Ms. Ashraf Jahan for few months…what a fine lady..superb in intellect, devoted to work…& so dignified… a role model for all the female judges in Pakistan…!!

It is quoted that” That Nation destroyed who appointed female as their ruler”.Decision making with strong character is supported in every nation.Hazrat Ayesha decided the matters of women after the Prophet(PBUH).Malafide decisions not only destroy the basic structure of judiciary but also harmful for society.A justice who not do justice with himself how he can do justice with others.