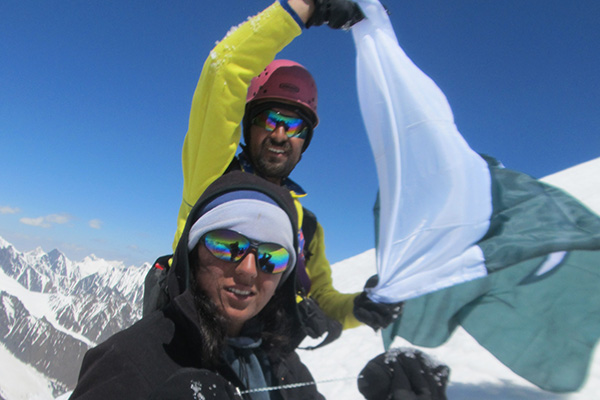 Pakistan on Monday congratulated Samina Baig on becoming the first woman from the country to reach the summit of Mount Everest.

The 22-year-old Baig, from the small town of Shimshal in the Hunza valley in Pakistan’s mountainous north, scaled the 8,848-meter peak early on Sunday after a grueling expedition in rough weather.

Karrar Haidri, member executive council of Pakistan Alpine Club, said Baig had raised Pakistan’s name in the world. “She is a brave girl who summited the peak and sent us a message of her achievement and the whole Pakistan is feeling proud of her,” he said. “She used her own resources and despite rough weather and fears of avalanche she never lost courage.” Haidri said Mirza Ali, Baig’s brother, was with her but was unable to reach the summit as he was unwell.

Baig was among 146 climbers to reach the world’s highest peak on Sunday, including the first woman from Saudi Arabia, Indian sisters who were the first twins, and a British climber who gave a live video interview via his smartphone.

British mountaineer Daniel Hughes was interviewed by the BBC in what he called the first live video call from the summit, but Nepalese officials said he had broken the law by not seeking official permission to broadcast.

In 2010, Baig became the first person to scale the 6,000-metre Chashkin Sar peak in northern Pakistan and the mountain is now named “Samina Peak” in her honor.

Pakistan is home to five of the world’s 14 peaks over 8,000 meters, including the world’s second-highest mountain, K2, but Haidri said mountaineering needed more government support. “I sincerely hope that Samina’s achievement will induce more and more women to join this sport and help us convince the government to give more funds to us so that our people can attain more height in this department,” he said.