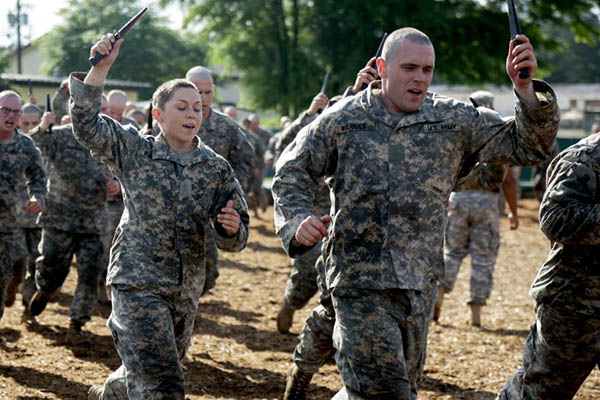 Pioneers hope their experiences will help convince the military to allow women in male-only units.

The first women to pass the grueling training course at the U.S. Army’s elite Ranger School said Thursday they hoped their success would open doors for women seeking jobs in frontline combat.

Lieutenant Shaye Haver and Captain Kristen Griest will graduate on Friday as the first women combat leaders to pin the coveted Ranger tag on their uniform, trained to become infantry leaders. The U.S. military is currently considering opening up roles in previously male-only units to women, including some frontline infantry and Special Forces roles.

Appearing before the news media for the first time since they emerged battered but grimly triumphant from the Florida swamps after months of training, the young officers hoped their example would influence the debate. “I do hope that we’ve been able to inform that decision as to what they can expect from women in the military, that we can handle things physically and mentally on the same level as men and that we can deal with the same stresses in training that men can,” said Griest, 26.

Ranger School takes at least 61 days to complete and in some cases, if sections are repeated, many more. Griest took four months to qualify, training for 20 hours a day and carrying 90 pounds of kit and weapons.

But she never thought of giving up.

“I never seriously considered it. I definitely had low points, particularly in the swamps in Florida,” she said. “But I never actually thought anything was going to be too difficult that it was worth leaving the course.”

Haver, an Apache attack helicopter pilot, admitted she had thought about quitting, but that the shared experience of the men and women around her kept her going. “There’s a point that you hit along the way, doesn’t matter where it is, it’s different for everybody,” said Haver, 25. “But the ability to look around to my peers and see that they were sucking just as bad as I was kept me going and I’m pretty sure that they could probably say the same thing.”

Along with the two women, 94 men will graduate from Ranger School this week.

“A lot of the time, you couldn’t tell the difference between the men and women,” said Colonel David Fivecoat, commander of the Airborne and Ranger Training Brigade.

Many others dropped out, and among those who passed, some admitted to doubting their female comrades’ chances. “I was skeptical until we got to the mountain,” said Second Lieutenant Michael Janowski, recalling the arduous second stage of the course in the remote highlands of Georgia. “I was struggling,” he admitted. “I asked if anyone could take some overweight. Shaye took some of the weight. I had no more skepticism from that point.”

The progress of the women has been closely monitored by the military community, where the prospect of female forces in combat is still a divisive issue. The exclusion of women from combat roles has stymied the careers of some female officers as it can in practice prevent them from reaching high ranks where combat experience is considered indispensable.

Supporters point out that many women have already been exposed to the rigors of combat in recent conflicts—insurgencies with blurred front lines—and fared well. In Afghanistan, the U.S. Marines set up units called “Female Engagement Teams” to patrol in areas where they could engage with and try to win the trust of civilian women.

Women make up about 15 percent of U.S. Army personnel. Since the decision to open some combat positions to women, about 111,000 posts out of some 331,000 previously closed have been opened, according to the Defense Department.

But the armed services—the Army, Marine Corps, Air Force and Navy—can still request that women be barred from specific jobs and the door has yet to be opened for women in infantry combat roles. They have until the start of next year to decide whether to maintain the ban.