Home Culture Fit for a Prince

Fit for a Prince 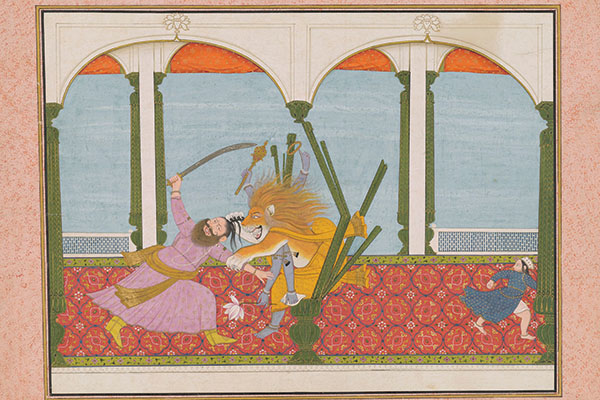 A folio from a series of Pahari paintings depicting the story of Prahlada from the Bhagavata Purana, circa 1775–90. Royal Collection Trust © Her Majesty Queen Elizabeth II 2018

The tour of India undertaken by King Edward VII, then Prince of Wales, from 1875 to 1876, has been brought to life for modern audiences 130 years later, with a lavish and glittery display at the Queen’s Gallery, Buckingham Palace, of the gifts he received. The featured arms, jewelry and courtly objects are all objects collected by the Prince during his four-month diplomatic tour across India, where he met more than 90 local rulers from Bombay, Calcutta and Lucknow, and was presented with over 2,000 examples of Indian craftsmanship.

The eldest son of Queen Victoria and Prince Albert, Albert Edward, known as ‘Bertie,’ was less academically minded than his brothers, but enjoyed traveling. His parents encouraged him to make the sojourn to learn more about the country over which he would eventually rule and to establish a personal diplomatic relationship in the aftermath of the 1857 Uprising against colonial rule.

Amongst the gifts on display is an elaborately designed perfume holder presented by the Maharajah of Jaipur, Ram Singh II. Pressing a rod beneath the tray delicately unfolds the leaves of the lotus casing to reveal a yellow enameled cup and cover. The elephantine feet of the tray are encrusted with diamonds, and the tray itself, with a fringe of pearls, depicts hunting scenes, the Chandra Mahal, and Amber Fort. This fine piece of Jaipuri craftsmanship was estimated at the time to have taken five years to complete, and cost 10,000 rupees to produce. The Maharajah of Benares also used Jaipuri enameling to present an inkstand in the shape of peacock, modeled on the Maharajah’s own state barge, which the Prince actually traveled on during his visit. The gold, silver ruby, sapphire and diamond inkstand contains 19 tiny items of stationery, and seems unlikely to have been intended for any practical use between a pile of books on a desk. Instead, it stands as a fine example of Indian decorative arts, and display of wealth often used in brokering diplomatic relations. However, the glitz of the Indian gifts was not always in what would be deemed “good taste” by British standards, and a garish crown gifted by the Taluqdars of Awadh, which featured the Prince of Wales’ feathered emblem in diamonds and emeralds, was thought to be ‘far too theatrical and tinselly to be pleasing’ when redisplayed in London. 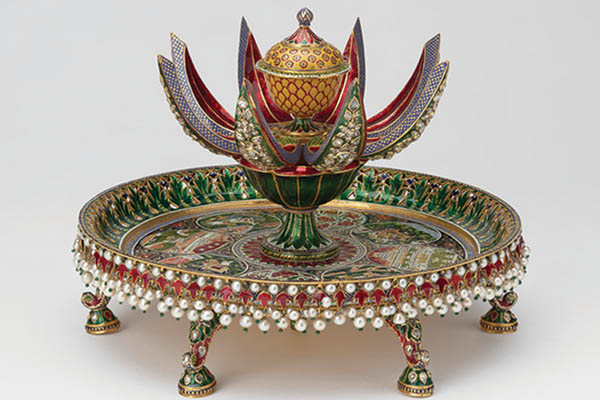 One could be forgiven for thinking that this entire trip was some sort of extended Christmas morning, with diplomatic relations so focused on the traditional exchange of gifts. Ahead of the tour, the British anxiously realized that their gifts could never monetarily equal what they expected to receive from the Indians. Previously, the East India Company would sell the gifts they had been given to recover costs of the gifts they would give, but the Prince of Wales roundly rejected this proposal. The solution came from then-Viceroy of India, Lord Northbrook, and was not dissimilar to the £5 limit that we often place on “Secret Santa” exchanges, as he asked that Indian rulers should only present “curiosities, ancient arms, and specimens of local manufacture” to the Prince. A ceremonial durbar was not held, and the exchange of gifts customary for those occasions was not made. Whilst none of the gifts given by the Prince of Wales are included in the exhibition, they were similar to those given by the East India Company to Mughal emperors: gold and silver rings, watches, illustrated books, rifles, and medals depicting the Prince himself. However, as with all “Secret Santa” exchanges, there is usually one rogue member of the group who cannot resist sneaking in a gift above the price limit, and clearly the Indian rulers did much the same, broadly interpreting Northbrook’s guidelines so that the Prince of Wales found himself presented with gifts both of extremely high value and historical importance.

Alongside the contributions he was given as part of diplomatic exchange, the Prince of Wales also found time to do some holiday shopping in India. Amongst the glittering gifts of enameled and gem-encrusted jewelry, we also see a remarkably heavy looking gold and ruby bracelet—a gift from the Prince for Queen Victoria’s 57th birthday. Like many tourists today, the Prince tried his hand at bargaining for it with peddlers. The bizarre scene is recounted by the official tour diarist, William Howard Russell, who describes the exchange thus: “There was no more peace, but there was much bargaining for bangles and jewelry.’ The chunky gold bangle, sculpted in the form of the fantastical sea creatures, makaras, is in fact hollow and filled with resin, and one cannot help wondering why the future king of England, hardly short on funds, needed to haggle for his mother’s birthday present. 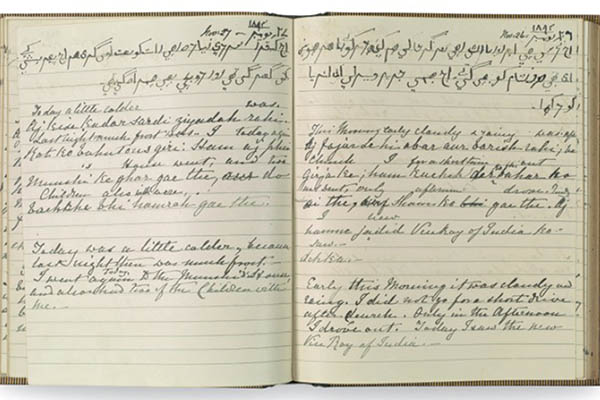 A complementary exhibition following on from the Prince’s Tour is a stunning display of four centuries of Indian paintings and manuscripts. Whilst less glitzy than the exorbitant gift exchange, this collection is perhaps even more dazzling than the Prince’s souvenirs, featuring works of art and calligraphy that are being displayed to the public for the first time, having never left the imposing shelves of the Royal Library at Windsor Castle before. Although the Royal Collection has one of the finest Indian collections in the U.K. due to the history of imperialism, this is their first attempt to bring together the manuscripts and paintings from the Indian subcontinent, displaying them in the grand royal hallways which otherwise only feature Van Dykes and Rembrandts. The exhibition of the bizarre Hindu Pahari paintings, Queen Victoria’s Hindustani journals, and Mughal masterpieces is truly a treasure trove.

Although Sir Thomas Roe, in 1613, led the first official English diplomatic mission to India at the command of King James I during Emperor Jahangir’s reign, the majority of the Indian collection was formed later, under George III, who received many books from the subcontinent as gifts. Curator of Islamic and South Asian Collections, Emily Hannam, says, “I wanted to explore the idea of art as diplomacy and how the nature of gift-exchange evolved from the earliest encounters with the Great Mughals up to the last decades of the British Raj.” From the time of Thomas Roe’s arrival in India, where he found himself woefully ill equipped to impress Jahangir with gifts of looking glasses, swords, and prints, the nature of gift-exchange soon evolved during British rule. 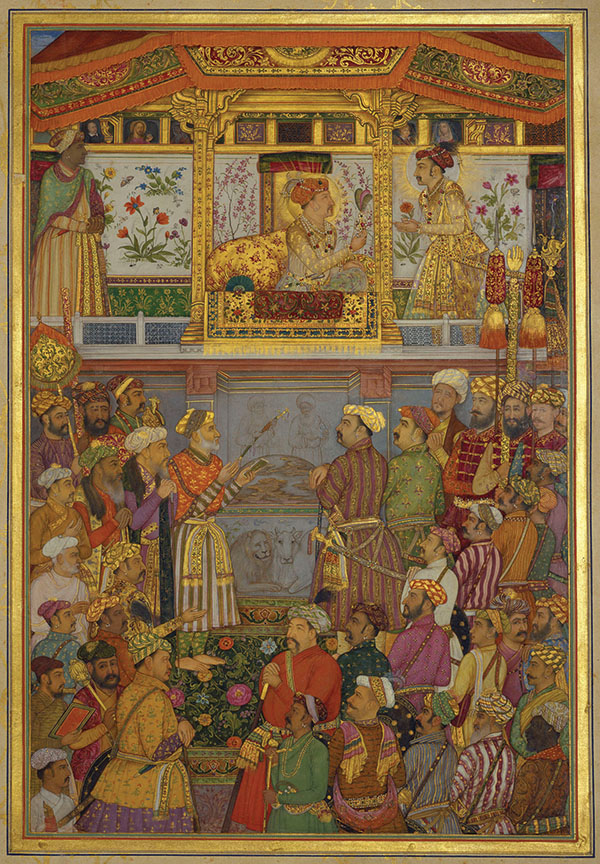 One of the paintings from the Padshahnama manuscript, 1656–7. Royal Collection Trust © Her Majesty Queen Elizabeth II 2018

The ethics of what constitutes a ‘gift’ becomes quickly murky with the display of manuscripts from Tipu Sultan’s collection, which was looted by the East India Company following his defeat. More than 30 objects from the Prize Committee established to distribute the spoils of war were sent to George III. One of these was a 17th century Quran from Tipu Sultan’s personal library, and is annotated by the Tiger of Mysore himself, which is an incredibly intimate book to pass between the two rulers. “Unfortunately, we do not have records of George III’s own thoughts on his Indian collections,” says Hannam. “Nevertheless, when his library was bequeathed to the nation in 1828 the Indian manuscripts were deliberately held back and retained for the Royal Library. For me, this speaks volumes about their significance and just how important they were regarded at the time.”

Undoubtedly the highlight of the exhibition is the Royal Collection’s rare copy of the Padshahnama, the “Book of Emperors,” a contemporary chronicle commissioned by Shah Jahan, the Mughal emperor famously responsible for the Taj Mahal, as a celebration of his dynasty. The magnificent book, which is a combination of prose and verse, is the only contemporarily illustrated version of the Padshahnama to survive, and was presented by the Governor-General of India, Lord Teignmouth, to George III as a gift from the Nawab Of Awadh in 1798. It features notable scenes from Shah Jahan’s lifetime, including the decapitation of a rebellious noble, which somehow still seems to be rendered with exquisite beauty and color, despite several greenish-grey decapitated heads populating the scene. 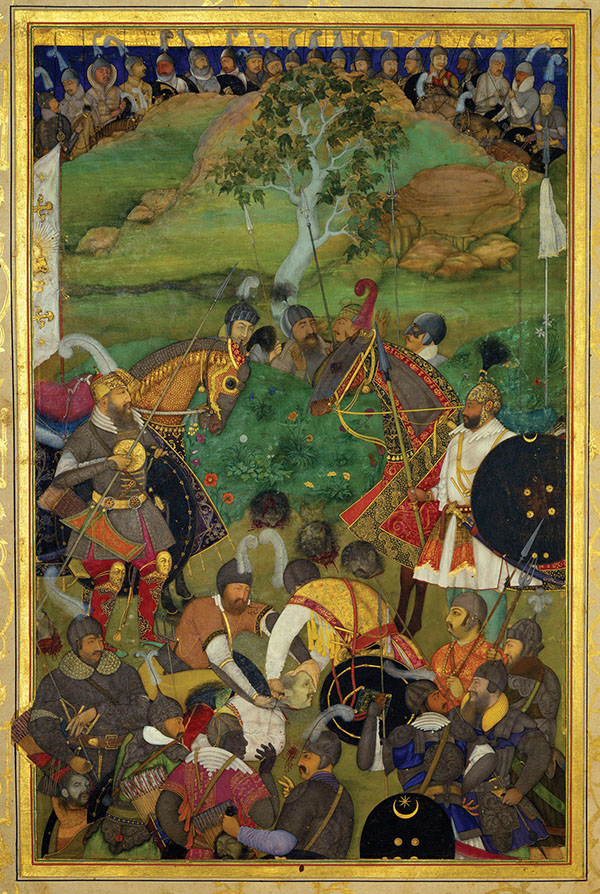 The level of artistic skill involved in the Padshahnama is remarkable, and is the result of Shah Jahan’s keen watch over the artists he employed, as he held daily meetings to inspect their work. The emperor would fall ill within months of the Padshahnama’s completion, and after being forced to abdicate by his son, Aurangzeb, would live out his last 8 years confined in the Agra Fort. A painting of the young Prince Aurangzeb fighting a crazed elephant (historically, elephants were intoxicated before such bouts) whilst proudly watched by Shah Jahan stands as a grim reminder of what is to come between the father and son.

Splendors of the Subcontinent is a shining display of arts patronized by Indian royalty, passing back through the hands of British monarchy as an insight into how Indian rulers and the monarchy engaged which each other to produce a singularly rich collection. It is hoped that it’s short run at The Queen’s Gallery, Buckingham Palace, which concluded on Oct. 14, will encourage the organizers to incorporate parts of it in the permanent display.