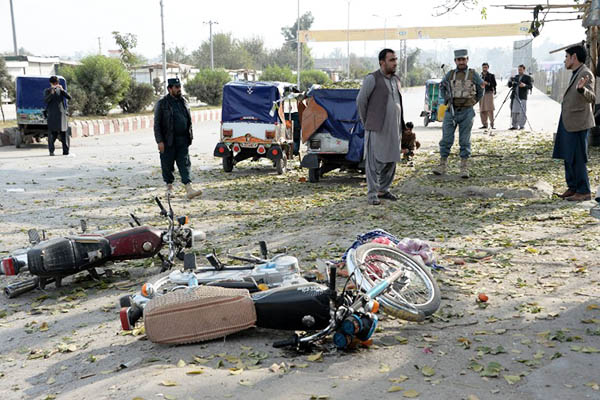 At least 27 others injured in Jalalabad attacks.

At least five people were killed and 27 others wounded in a triple bombing in eastern Afghanistan’s Nangarhar province on Friday, provincial officials said.

There was no claim of responsibility for the three bombings in Jalalabad, the capital of Nangarhar province, which is a hotbed of I.S. militancy.

“Five people were martyred in three explosions in different parts of Jalalabad of Nangarhar province this morning,” said provincial spokesman Ataullah Khogyani. He said the first blast was a roadside bomb, which detonated outside the house of a senior prison official, Abdul Hakim, killing him and a child and wounding six others.

The second blast came outside the fire brigade office—from where the first rescuers are usually dispatched after an attack—killing three and wounding 21.

Khogyani said the third blast came as people gathered at Hakim’s house after the first blast, but there were no casualties.

The I.S. group appears to be intensifying attacks against the government and civilians as Afghan forces, backed by NATO airstrikes, step up operations against them in Nangarhar. Last week I.S. claimed a massive suicide blast targeting Shiites in Kabul that killed at least 27 people.

In late October, a suicide bomber killed at least six people at a gathering of tribal elders seeking aid for war-displaced families in Jalalabad. As well as the emerging threat from I.S. loyalists, who are making gradual inroads across Afghanistan, Taliban fighters are active in Nangarhar.