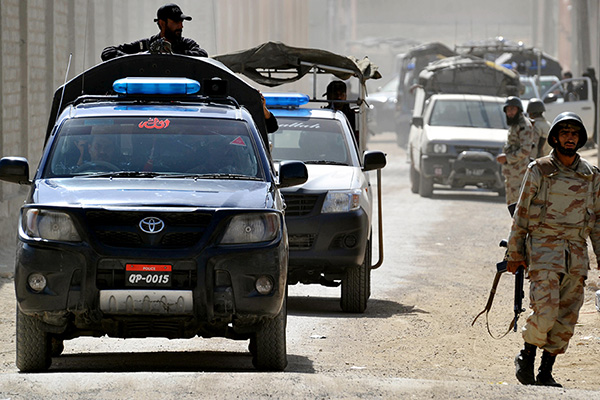 At least three Taliban militants and two women were killed during a pre-dawn raid by security forces in southwestern Pakistan on Thursday, officials said.

Security forces surrounded a house on a tip-off that members of Tehreek-e-Taliban Pakistan were living in a neighborhood of Quetta, the capital of Balochistan province, they said. “Militants hurled eight hand grenades and fired at security forces wounding at least 15 security personnel,” said Abdul Wasay, spokesman for the paramilitary Frontier Corps. “The siege continued for about four hours and ended when three militants blew themselves up.”

Senior police official Fayyaz Sumbal confirmed the raid and added that bodies of two women were also recovered from the room of the house where the men blew themselves up.

Police are investigating when the group moved to the area and what they had been doing or were planning to do, he said.

In May 2011 police and Frontier Corps opened fire on four unarmed Russians and a Tajik, saying they were suicide bombers who attacked a checkpoint in Kharotabad on the outskirts of Quetta. A subsequent judicial commission found that the Tajik and the Russians, three of whom were women and one of whom was pregnant, were unarmed. It sacked two police officials over the killings.

When the Chechen terrorists were killed in the area, The judicial & media network along side ideological goons of terrorists were all out to put blame on FC. They were trying to tell the people of Pakistan that they were tourists without visa who had come to stay in Kharrotabad Quetta, all the way from Europe,