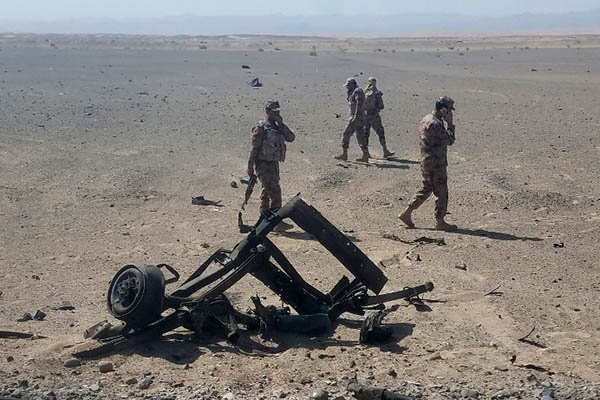 Two Chinese among the casualties of assault in Dalbandin region

The attack came in Dalbandin region, around 340 kilometers from Quetta, the capital of Balochistan province, when the Chinese engineers working on a mineral project were being transported to the city.

Local administration and police officials told AFP that two paramilitary soldiers providing security and the driver of the bus were wounded in the attack alongside the two Chinese nationals.

“The attacker, waiting in a small truck along the route, exploded the vehicle when the bus carrying Chinese engineers came close to him,” Dostain Dashti, a senior police officer in the region, told AFP on phone. He said that the body of the suicide attacker was blown up in the attack and his vehicle caught fire.

Saifullah Khaitran, a senior local administration official, confirmed the attack, adding that the condition of all the injured was stable. He added that the engineers were working on the Saindak project, a joint venture between Pakistan and China to extract gold, copper and silver from an area close to the Iranian border.

Muhammad Ibrahim, the driver of the targeted bus, told AFP from his hospital bed that he had averted major loss by slamming on the brakes when he saw blast in front of him. “The whole bus would have burnt if I had not applied the brakes in emergency,” he said.

“We targeted this bus which was carrying Chinese engineers,” Jiand Baloch, a spokesperson for Balochistan Liberation Army (BLA) told AFP by phone. “We attacked them because they are extracting gold from our region, we won’t allow it,” he said.

Balochistan is home to a long-running ethnic Baloch insurgency aimed at seeking greater control over the province’s mineral resources. Bordering Iran and Afghanistan, Balochistan is the largest of Pakistan’s four provinces, but the roughly seven million inhabitants have long complained they do not receive a fair share of its gas and mineral wealth.

Beijing is ramping up investment in its South Asian neighbor as part of a plan unveiled in 2015 that will link its far-western Xinjiang region to Gwadar port in Balochistan with a series of infrastructure, power and transport upgrades. Pakistan also regularly accuses its eastern neighbor India of funding and arming the separatist insurgents.