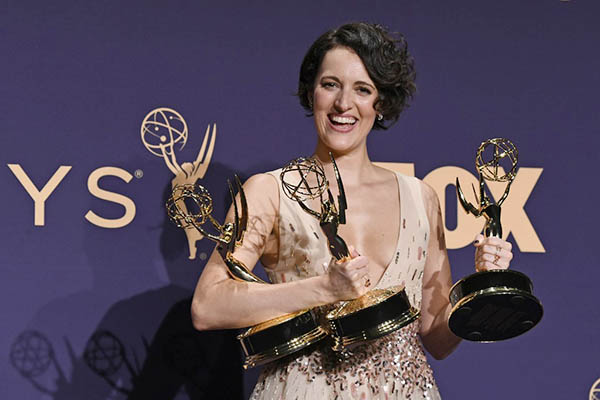 Game of Thrones took the top Emmy for best drama on Sunday but dark British comedy Fleabag was the surprise big winner of television’s glitziest night, dominating the comedy prizes at a star-studded ceremony in Los Angeles.

Thrones, the most decorated fictional show in the history of the Emmys—television’s Oscars—finished with 12 awards overall for its final season.

“Thank you to the hardest working crews in show business—the dragons who shot for 70 nights straight in freezing Belfast rain, the wolves who shot all around the world—you are amazing, all of you,” said showrunner Dan Weiss. “And it is amazing that all of you are still alive.”

Peter Dinklage won his fourth best supporting actor statuette for his portrayal of sharp-tongued dwarf Tyrion Lannister. But the blood-soaked fantasy epic’s hopes of going out with a new record for a single season were dashed after it failed to convert nominations in directing, writing, and the other acting categories.

The divisive final run of Thrones enraged many fans—more than a million signed a petition for HBO to redo its conclusion. But the 10 nominated cast members of the cast of Thrones received a standing ovation as they gathered on stage. “I think all of us agree how amazing the entire last season was for us,” said Sophie Turner, who played Sansa Stark.

Thrones had already bagged 10 Emmys in lesser categories at last weekend’s Creative Arts Emmys, including for the show’s special effects and elaborate costumes. It ends its eight-season run with 59 Emmys, a record for a drama or comedy. Only variety sketch show Saturday Night Live has more.

In the night’s biggest shock, Fleabag star Phoebe Waller-Bridge bested eight-time acting winner Julia Louis-Dreyfus (Veep) before the show itself won for best comedy series. The BBC show—which has grown into a phenomenon on both sides of the Atlantic after being acquired by Amazon—also scooped awards for best comedy writing and directing.

“It’s just really wonderful to know and reassuring that a dirty, pervy, angry, messed-up woman can make it to the Emmys,” said Waller-Bridge, referring to her character. “This is just getting ridiculous,” she said on adding the comedy series prize. “The journey has been absolutely mental.”

Fleabag was totally shunned by Emmy voters last year, failing to bag a single nomination. But the Television Academy’s 24,000-plus voters changed their tune for its second season. Waller-Bridge has ruled out a third season, saying the irreverent series about a self-absorbed young Londoner has come “to a natural end.”

Billy Porter made history as the first openly gay black man to win the best drama actor prize for FX show Pose, which explores New York’s underground ballroom culture in the 1980s. “I am so overwhelmed and so overjoyed to have lived long enough to see this day,” said Porter, who turned 50 on Saturday, in his acceptance speech. “I have the right. You have the right. We all have the right,” he added.

Sandra Oh failed in her bid to become the first Asian-American actress to win the leading actress in a drama category, beaten by her co-star Jodie Comer in BBC spy thriller Killing Eve. The pair embraced before British star Comer, who plays an assassin, collected her prize and told the audiences she hadn’t invited her parents to the ceremony “because I didn’t think this was going to be my time.”

Chernobyl—HBO’s drama about the 1986 nuclear catastrophe—won the Emmy for best limited series. It faced off against When They See Us, the searing true story of five New York teenagers wrongly accused of raping a Central Park jogger.

One of the Netflix show’s young stars, Jharrel Jerome, won the prize for best actor in a limited series. Bill Hader won for best actor for HBO’s hitman comedy Barry. The network pulled off another victory for Succession, with Jesse Armstrong a surprise winner for drama writing.

The glitzy 71st Emmys began at the Microsoft Theater in downtown Los Angeles with a comedy skit: a cartoon Homer Simpson was introduced as “host”—and quickly crushed by a falling piano. Breaking Bad star Bryan Cranston then appeared on stage to “rescue” the Emmys, delivering a tribute to television’s so-called golden era.

Both Game of Thrones and Veep were among the shows bowing out Sunday, having helped HBO raise the game for the small screen. But Louis-Dreyfus missed out on a ninth acting statuette—which would have been her seventh, and a clean sweep for every season, as foul-mouthed vice-president-turned-president Selina Meyer in Veep. “I’m sorry, I was told I would be up here alone,” she joked as she later appeared on stage with her co-stars—to a standing ovation—to present an award.

A full list of the winners of the Primetime Emmys follows:

Outstanding Directing for a Drama Series

Outstanding Writing for a Drama Series

Outstanding Director for a Variety Series

Outstanding Writing for a Variety Series

Outstanding Lead Actress in a Limited Series or TV Movie

Outstanding Lead Actor in a Limited Series or TV Movie

Jharrel Jerome, When They See Us

Outstanding Writing for a Limited Series, Movie or Drama

Outstanding Supporting Actor in a Limited Series or TV Movie

Outstanding Directing for a Limited Series

Outstanding Supporting Actress in a Limited Series or TV Movie

Outstanding Director for a Comedy Series

Outstanding Writing for a Comedy Series