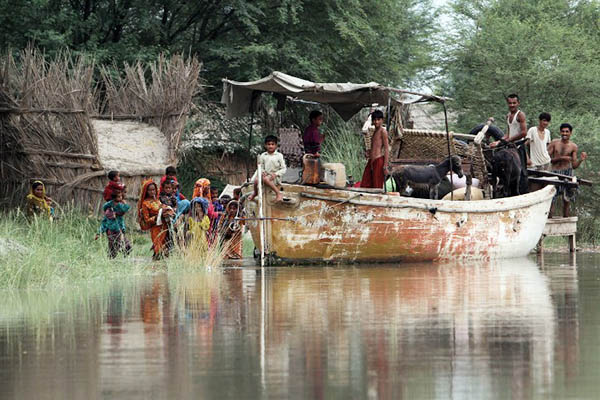 NDMA warns that weather forecast has potential to cause more flooding in next four or five days.

Severe weather has caused havoc in the north and south of the country, sweeping away dozens of roads and bridges in Chitral district in Khyber-Pakhtunkhwa, while floods have inundated villages in south Punjab, according to government authorities. Livestock and people have also been swept away in Balochistan and in the Kashmir region, officials said.

“According to the reports we have received until now, 26 people have been killed in Chitral, three in Punjab province and seven in Balochistan,” Ahmed Kamal, a spokesman for the National Disaster Management Authority (NDMA), told AFP. “Up to 350 villages have been damaged in Khyber-Pakhtunkhwa province and 422 in Punjab. An overall population of 250,000 has been affected due to floods,” he said.

At least eight members of the same family were killed on Friday night in Chitral when their house was swept away in the gushing floodwaters, an official in Khyber-Pakhtunkhwa said. Another family of four was killed when their car was swept away in Khuzdar district of Balochistan, according to the disaster management authority there.

The NDMA has forecast more rain across the country in the coming days. A warning on its website said that the severe weather is likely to persist in Gilgit-Baltistan and Chitral over the next four to five days, and has the potential to produce more flooding.

Every year since 2010, which saw the worst floods in Pakistan’s history, severe weather in the country has killed hundreds and wiped out millions of acres of prime farmland, harming the heavily agrarian economy.