Flying on a Fake ID 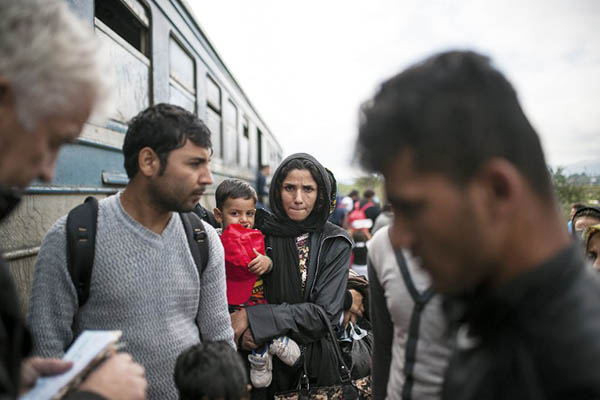 The path less traveled by refugees fleeing to Europe.

Ali, a Palestinian-Syrian banker desperate to reach the Netherlands, had to hide his surprise when he finally met a shadowy forger known as “The Whale” at an Arab-style shisha cafe near Athens.

“It turns out the guy I’d been speaking to, who sounded so big and scary on the phone, was actually tiny,” said 31-year-old Ali, now living as a refugee in The Hague which he reached by plane several months ago using a forged Italian identity card that cost him just $34. Unlike tens of thousands of other refugees and migrants, he was able to avoid the perilous, exorbitantly priced land journey through the Balkans and central Europe, all thanks to “The Whale.”

The rush to Europe has fueled a massive demand for fake IDs among people like Ali—not his real name—who already risked their lives once to reach Greece from Turkey on inflatable boats. Yet dealing with gangsters like “The Whale,” Ali warned, was also risky and cost him his dignity.

“All along, you know they’re cheating you, but you can’t say anything. You have to beg them to get what you want. It’s humiliating,” he said, speaking to AFP through the Viber phone app from his new home.

In April, Ali used the ID, which carried his picture but was in the name of someone called Marco Rossi. He caught a flight from Crete airport—“where security is lower than Athens”—to Paris, and then a train to The Hague. His older brother, who paid $114 for his Spanish forgery, wasn’t so lucky—he was caught out and would end up making the 3,000-kilometer journey to the Netherlands by land. “He was very upset that I left him at the airport, but what could I do, turn back and give myself up? I was really sad, but I had to keep going,” he said.

Before the Syrian war broke out four years ago, Ali had been through airports dozens of times and speaks perfect English. “My brother hadn’t left Syria before and didn’t know how to navigate the airport. It was a lot harder for him to blend in,” he said.

Every day, Greek police find up to 200 fake IDs, “most of them of poor quality,” at Athens airport, a European security expert told AFP speaking on condition of anonymity. While the Greek capital has for decades been “an international supermarket of false documents,” the current migrant crisis has vastly exacerbated the problem, he added.

“At least once a month, a fake ID ‘laboratory’ is dismantled in central Athens,” he said, adding that the people who run them are “mainly Albanians, Pakistanis, Iraqis and Syrians who have lived in Greece for a long time.”

Ali had made two failed attempts using a fake French ID and a Swedish passport before making it to the Dutch capital, where his Syrian girlfriend was already living. “I bought the Swedish passport for $1,000 from its holder, a man of Iraqi origin. It was due to expire, I thought he was just out to make a quick buck,” said Ali.

It turned out that the Iraqi-Swede was wanted by Greek police for drug-related crime. “Only when I managed to convince them I was actually a Palestinian refugee did they let me go,” he said.

On Oct. 7, Greek police arrested 12 members of a gang that forged documents for migrants. Part of the network operated on the island of Kos in the Aegean Sea, close to the Turkish coast, from where thousands of migrants attempt the sea crossing every day. On arrival in Greece the migrants are often held in apartments to stop them finding other smuggling gangs.

Ali’s girlfriend Rania—like Ali, her name has been changed to protect her identity—has been living in the Netherlands since November last year, but to get there she was among those who paid for a smuggling “package”. For $3,400, she was held in an apartment, handed a stolen Bulgarian ID and told that for five days her smuggler would pay for as many flights as necessary to get her to her destination.

“The picture on the ID looked like me. I was caught the first time, but I hid my fear and got through the second time. When I reached Amsterdam Schipol airport, I went to the bathroom and threw the ID away, just like you see in the movies,” said Rania, 28.

The young woman said that before the war she would never have imagined traveling illegally. But she could not risk being returned from Dubai, where her residence permit was due to expire, to Syria: her uncle is a high-profile dissident, which puts the whole family at risk of arrest.

“I was very scared, smugglers are criminals. But for we Syrians, death is everywhere. Rather than criticize me for forging an identity, people should try to put themselves in my shoes,” she said. “If there had been a legal way for me to get here, I would have taken it.”