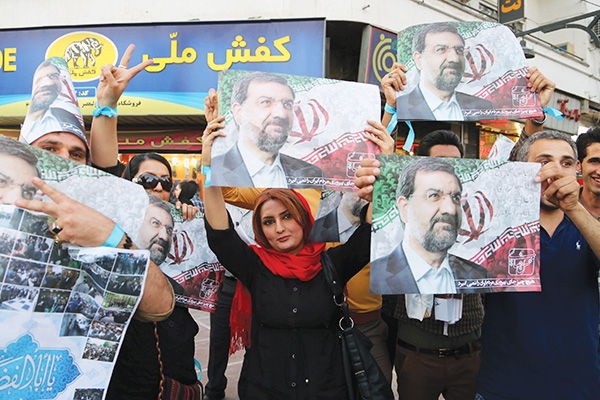 In Iran’s June 14 presidential election, Iranians will be free to elect one of eight candidates, but none will be bringing hope or change any time soon.

All are favorites of the country’s Supreme Leader, Ayatollah Ali Khamenei. Most of them are hardliners who offer no meaningful updates to Iran’s foreign policy, solutions to its growing economic crisis, or improvements to its abysmal human-rights record. They have another thing in common, too: absolute obedience to Khamenei.

The slate tilted heavily toward the Ayatollah on May 11, when the Guardian Council, responsible for vetting presidential candidates, disqualified the candidacy of Akbar Hashemi Rafsanjani, Iran’s former president. Many reformists and regime critics had supported him, but Rafsanjani, 79, was kept from appearing on the list of candidates ostensibly due to his old age.

With Rafsanjani’s elimination, eight candidates were approved, six of whom were Khamenei appointees to government positions, have family ties to him, or are known to be his trusted aides. Only two candidates close to being reformists are on the list, but it is expected that neither of them will win.

The most extremist of all the candidates is Saeed Jalili, a diplomat who served as a senior director of policy planning in the Supreme Leader’s office in 2001 and has been the country’s chief nuclear negotiator since 2007.

He is considered one of the most fundamentalist politicians in a decade, according to a political analyst in Tehran who declined to be named for security reasons. “Since becoming Iran’s chief negotiator, he has brought the country a chain of sanctions and political isolation. For him, like Khamenei, everything is about ideology,” the analyst tells Newsweek.

But Jalili has a serious competitor: Ali Akbar Velayati, Iran’s former foreign minister and the Supreme Leader’s top foreign-policy adviser. Another is the mayor of Tehran and the former head of Iran’s police force, Mohammad Bagher Ghalibaf.

“People are disappointed since [Rafsanjani] was disqualified,” a political activist in Tehran tells Newsweek, on condition of anonymity. “There is wide speculation that Jalili is Khamenei’s pick and that his name will come out of the ballots no matter what. But Ghalibaf has popular support too, and this election will most likely be a fight between the two favorites of the Leader.”