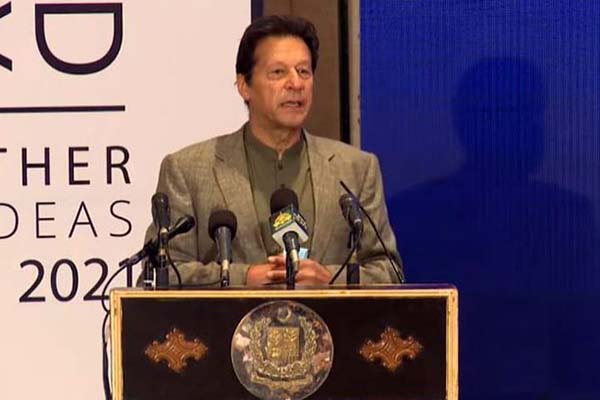 National security relates to areas that people seldom think about, Prime Minister Imran Khan said on Wednesday, as he inaugurated an advisory portal aimed at engaging think-tanks and academics in Pakistan’s policy-making.

Addressing a conference organized by the National Security Division to unveil Pakistan’s new strategic direction based on a comprehensive security framework, he said the country needs to have a serious debate on the concept of national security. He stressed that climate change was among the issues that could pose a serious threat to national security.

Claiming that the issue had not been paid any attention to earlier, he described climate change as a “frightening thing” that could potentially overshadow all other concerns for future generations. “Pakistan is among the countries taking steps to tackle climate change,” he said, adding the incumbent government had been internationally recognized for its “10 Billion Tree Tsunami” initiative.

Also an issue for national security, said the prime minister, was food security. He said the government was aware of the problems faced by the common man, and emphasized that it would launch a comprehensive program to tackle it in the coming weeks.

Referring to the economy, Khan said it played a key role in ensuring national security. “National security cannot be [achieved] in a country where there are some rich people and a sea of poor people,” he said, adding that in “secure” nations, every citizen felt they had a stake in government. He said the incumbent government had attempted to tackle poverty through its Ehsaas program, which was offering cash handouts and targeted subsidies for deserving citizens.

Paramount for national security, said the prime minister, was good relations with other countries, especially regional neighbors. “We will not be able to take full advantage of our geostrategic location until we have regional peace, until our relations with our neighbors and our trade ties improve,” he said, and hailed the role Islamabad was playing in ensuring the success of the Afghan peace process.

He said it was “unfortunate” that India had rebuffed Pakistan’s efforts for peace. Referring to India-held Kashmir, he said that if Delhi gave Kashmiris their due rights in accordance with relevant United Nations Security Council resolutions, the entire region would “change and both countries would benefit.”

The prime minister emphasized that it was important for the National Security Division to seek advice from universities, think tanks and intellectuals to aid in achieving national security and improving the country’s overall cohesion. “When you start this dialogue, then this coordination will bring a lot of benefit for inclusivity, nation building and national security in Pakistan,” he said.

Earlier, Special Assistant to the P.M. on National Security Moeed Yusuf told the conference’s participants greater inclusivity in policy-making was an essential requirement. Claiming the public sector of Pakistan had been unable to effectively utilize country’s “immense talent,” he said the advisory council would bring the best minds on security to advise the government.

The Islamabad Security Dialogue is a strategic forum that seeks to serve as Pakistan’s leading intellectual platform for issues related to national security. The members of its advisory portal would be able to share policy recommendations directly with the national leadership.