Home Culture Food to Die For

Food to Die For 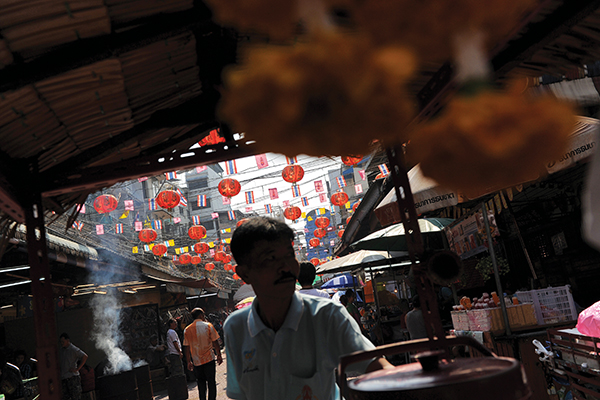 Welcome to Bangkok, heaven on a plate.

[dropcap]C[/dropcap]hef Robert Oliver, in a recent piece on The Huffington Post, declared that Bangkok is “the Lady Gaga of Asia” and that her street food is the best on earth. It’s an understatement, insofar as Lady Gaga is quite restrained compared to Bangkok, and insofar as the English language—never very good at approximating the sensuality of food—strains at the bit when trying to render the movable feast that is the Thai capital today.

Cast an eye down the miserably dated restaurants suggested by Fodor’s online guide to Bangkok and see how Western arbiters have failed to keep up with the city. When Michelin tasters ventured into Japan a very few years ago, they accidentally upended the world’s gastronomic hierarchies almost overnight. Now Kyoto, a relatively small city of under two million people, hosts almost as many Michelin-starred restaurants as the United States does. Tokyo is so dominant among the world’s food cities that it is in a category all its own. It is not just Japan but Asia as a whole that is the true epicenter of humankind’s most engrossing (and occasionally ludicrous) pastime: eating. How long before Hong Kong, Singapore, and—perhaps most interesting of all—Bangkok become the cities where you not only eat better than anywhere else on earth, but know you do so? In these Asian cities one understands that food is not ghettoized in the restaurant. It swarms and seethes in the streets.

Street food is something we simply don’t have in the West. The commissars, the hygiene bureaucrats, and the police would not permit it. And so the Western city slowly becomes an old people’s home without any sidewalk spice. Having moved to Bangkok after 18 years in New York, I am surprised to discover that I have been plunged into a kind of wild, pagan food Satyricon that makes my beloved Gotham feel like a self-denial program for recovering bulimics.

In Bangkok (to take the humble example of shopping for groceries) I shop at the supermarkets at Paragon and Emporium, and I must confess that nothing prepared me for the experience—certainly not a grim decade at Whole Foods in New York. Westerners love to mock their own consumerism, but if only they had any. The market at Paragon is so vast, so variegated, that I literally get lost in it for hours with no idea where the points of the compass are. Nor do I care. This is not food shopping for survival; this is just surrender to the fruits of the earth.

There is, for example, a purely Japanese section at both Paragon and Emporium where you can buy lavender Hokkaido milk and fresh natto and that morning’s tuna from Tokyo—after all, 100,000 Japanese live in Bangkok, and they have their own supermarkets, the Fuji chain, as well as their own products in the Thai markets. There are tea sections stacked with roselle and blue-pea anchan and flowered green teas with jasmine and vanilla, whole Thai meals in little plastic bags, live crabs and homemade tofu, fresh-squeezed coconut milk, guava, passion fruit, and mango for $2, and saba mackerel served on beds of crushed ice to the sound of female voices cooing on the sound system in Japanese, Arabic, English, Thai, French, and Mandarin.

But at Paragon the actual supermarket is the least of it. There are about 100 restaurants inside and around it. There are South Indian dosa joints, handmade-ramen stalls, sushi and sashimi outlets by the dozen, Issan (northern Thai) barbecue places, guaytio naam noodle-soup benches, French boulangeries, Tokyo chocolatiers, Shandong stir-fry and shabu shabu palaces. Yeah, do your groceries!

Shopping therapy completed, a doorman in white gloves summons a taxi, and I am taken home, a spoiled, sweating Billy Bunter smelling of guava and octopus sushi. Well, one thinks, it’s not the First World. But then in Bangkok, food is a spectator sport, a form of the Hunt. It is sanuk—Buddhistic “fun.” It would devour your average foodie alive. Memories of Whole Foods and Boar’s Head counters at “gourmet” stores fade into pure melancholy, where they will remain forever filed under the rubric of Things Endured in the Line of Duty.

Go through the Klong Toei market in the early hours, through the piles of sea snails and sea cucumbers and pig heads and writhing eels and live chickens, and pick your way through the alleys being hosed down in the heat. You can stop and eat anything. It is pure animality. Blood flows everywhere. One cruises through Bangkok at night in a kind of gentle astonishment. In a city of 100,000 restaurants (maybe twice that if you include street food) you are adrift in an unfathomable richness whose surface you can only scratch with a tin fork. Remember, there are 8,000 eateries in New York, and maybe 12,000 in Paris. You will never, no matter how long you live, get to the bottom of the City of Angels. You will never taste everything, not even once.

Westerners love to mock their own consumerism, but if only they had any.

Everyone has their places. Being a nocturnalist, I love going to a decayed alley at Sala Daeng on Silom where the outdoor fish tanks filled with suddenly alarmed slipper lobsters announce the presence of Talad Nam, an open-air courtyard filled with 1960s Thai luk thung music and tables laden with sea bass in green lime sauce wedged into fish-shaped pewter dishes bubbling over flames. The antennae of giant prawns bristle over the edges of the tables. I love to trawl through the world’s biggest Chinatown, eating on the street on Yaowarat, in the heat of massive crowds gorging on fresh crab at J and L. I go to Soi 38 on Sukhumvit for late-night dessert, mangoes and sticky rice, khao niaow ma muang, or else I walk down Thong Lo nearby to the tiny Vietnamese eatery of Xuan Mai and order fresh, hot sugar-dusted beignets made for the yearning mouths of 12-year-olds. Sometimes I will crave a single thing for a week—khor moo yang, perhaps, the grilled succulent pork neck of the Thai north, which I can eat on my street at 2 in the morning under a mango tree with the girls from the Gion karaoke club. Or crunchy, bittersweet mee krob fried noodles made with green orange. Or just those mangoes.

So that is the eating part. At midnight and later, however, I will go to the Japanese whisky bar of Hailiang on Soi 33, a 12-seat, unmarked Osaka speakeasy squeezed between two massage parlors and 30 girls in silk ball gowns. At this elegantly beautiful bar I drink 18-year-old Yamazaki single malt and rare bourbons I have never seen elsewhere. I sit alone, and no one bothers me except the charming barman from Osaka, with whom I exchange tasting notes about Bowmore malts. He will carve an ice ball with a special imported Japanese instrument while I cool my face with a hot towel scented with eucalyptus. When I am done drinking, I am served maybe the best homemade miso soup I have ever had and dispatched into an ever-young night with bows. That’s how it’s done.

You can see how living here quickly becomes a struggle to do serious things. You don’t have to think about sex anymore, because it is solved, and you are no longer poor, because the cost of living is favorable (for an exile, anyway), so your natural human proclivity for procrastination, mindless pleasure, and dithering anticipation is instantly transferred onto food. It’s lamentable. Meanwhile, new restaurants appear every week, mushrooms sprouting in an economic climate in which the term “crisis” does not pertain (annual growth: 5 percent; unemployment officially at 0.9 percent). Whereas even five years ago one might have complained that the excellence of street food had not made its way into air-conditioned salons with proper tables, the city’s younger entrepreneurs have created a whole new sector of stylish places where the Thai genius for interior elegance and superb service is married to one of the world’s greatest cuisines. It is just emerging.

So now we have Issaya Siamese Club on a small back street off Sathorn, the creation of Thai chef Ian Kittichai, who is now repatriated from New York, where he made his career. We have the small and chic Supanigga on Thong Lo, and Jarrett Wrisley’s Soul Food and his newly opened Italian place, Appia, on Soi 31 (his partner, Paolo Vitaletti, is another exile from Rome and seems to be about to singlehandedly make Bangkok into a decent metropolis for Italian food). We have the 1930s dining room at the Cabochon Hotel and the restaurant about to open at Opposite on Soi 51, courtesy of the owners of WTF bar, Chris Wise and Somrak Sila. We have the refined Chon restaurant at the Siam, set in teak houses that once belonged to silk trader Jim Thomson. We have Bo.lan on Soi 26, with its smoky, earthy curries and pungent forest products, and we have David Thomson’s Nahm at the Metropolitan hotel, one of the greatest Thai restaurants and indeed one of the greatest restaurants in the world. Chef Oliver, for his part, declared that Issaya too deserved that moniker—I am in no position to disagree. I ate its intense jasmine panna cotta last night, and it’s one reason I am writing this piece.

Thais often turn up their noses at some of these places because they assume, for no particular reason, that no mere farang could possibly understand their cuisine. I happen to think they are wrong. A syncretic world city deserves, and usually gets, a syncretic world restaurant scene. At its top end there is now the Water Library on Thong Lo, where with food writer Tom Downey I recently ate my way through a $300 tasting menu accompanied by Deus beer served like champagne. Ridiculous, perhaps, but there nevertheless. The old Bangkok of Vietnam bars and impoverished expats and fish-and-chips and cheap satay has turned as if overnight into the sixth-richest city per capita in Asia. When the dowdy Michelin spooks finally arrive, Bangkok will very likely not even care that much. Her urban food is already better, richer, and more powerful and soulful than anything east of Mumbai, and she knows it.

Osborne is the author of Bangkok Days (a travelogue), The Forgiven (a novel), and, most recently, The Wet and the Dry (a drinker’s chronicle of bars around the world). From our May 3, 2013, issue; Food to Die for In Bangkok.