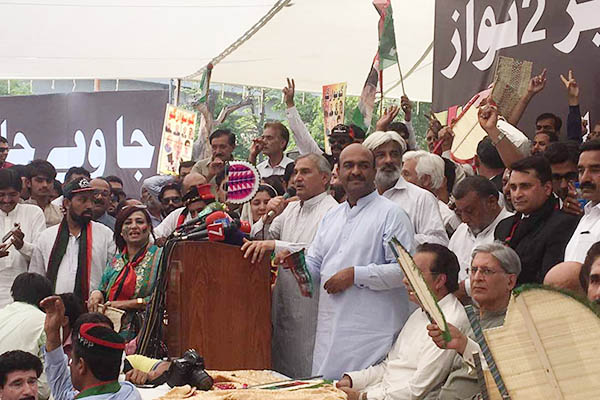 Can the PPP hope to recover its base in Punjab province by siding with the establishment against the PMLN?

The Pakistan Peoples Party rally against loadshedding at Lahore’s Nasir Bagh on Thursday was the political party’s first major effort at rebuilding a public profile in Punjab after years of struggling to make any headway in either the province or its capital. Most of the party’s second-tier leaders were present, while the discourse appeared preset by the abysmal state of inter-party relations in Pakistan. Speakers rehashed the Panama Papers and Dawn Leaks controversies currently plaguing the ruling PMLN and presented them in a manner that showcased even respectable party-leaders as cheap rabble-rousers. Unsurprisingly, the crowd was smaller than anticipated; the venue after all was Lahore, where there is virtually no loadshedding. That did not stop the PPP leadership from making it a key plank of their speeches, which were promptly served up to the masses by local TV channels.

The PPP was once the most hated party of the Pakistani establishment. By the end of the paradigm-shifting decade of General Zia-ul-Haq, “jihad” was de rigueur, and Islamabad had strategic assets that could be used internally when not deployed against India or in Afghanistan. The PPP and currently ruling Pakistan Muslim League (Nawaz) took turns at being toppled from power, as the ISI under General Hamid Gul sought to create new, more pliant parties. Although the PMLN was more favored, the establishment had become accustomed to calling the shots that would normally be the purview of an elected government. Therefore, even the PMLN was in trouble while in power. Intra-party rifts allowed the establishment to successfully pit one group against the other, playing up their keenness to be used.

The next paradigm shift occurred when the strategic assets deployed by the establishment turned on their masters. The war on terror, still ongoing, was brutal on the PPP, with militants driving its senior leadership into hiding. The Pakistani Taliban did not specifically target the PMLN during the 2013 election campaign, giving them a clear advantage in the run-up to the polls. The militants have, predictably, turned their ire toward Prime Minister Nawaz Sharif since.

When former prime minister Benazir Bhutto was assassinated, many pundits wondered if the establishment had gotten her killed through the Taliban and PPP Chairman Bilawal Bhutto Zardari has continued to blame then-president Pervez Musharraf for his mother’s killing. Despite this, the PPP in 2017 seems to have forgotten the lessons of the past. Siding with the establishment has never helped them; hoping against hope that this time will prove different may well turn out to be a fool’s errand.