For Allah, China and Marx 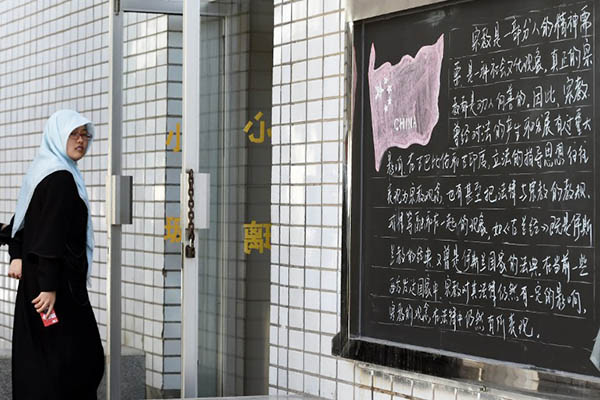 Every morning on his way to class at one of China’s largest Islamic institutes, Wang Yue is reminded that the state comes before Allah. Emblazoned in gold etching on a white marble slab at the main entrance—and repeated all over campus—is the slogan: “Love the nation, love religion.”

The contrast is even more striking than the hierarchy: in China patriotism is synonymous with supporting the ruling Communist Party, which is officially atheist. But the students see little contradiction between the teachings of Marx and those of Islam’s Prophet.

“Part of being a good person, and a good Muslim, is loving your own country,” said Wang, who is in the last of his four years of studies at the institute in the northern region of Ningxia. “Marxism and religion don’t contradict each other, and understanding other religions or theories can help us better understand our own faith,” he insisted.

While China’s constitution enshrines freedom of religion, authorities keep strict limits on it, recognizing only five belief systems, approving houses of worship, and seeking to control their messages. The country has two main Muslim groups, the Hui, who are concentrated in Ningxia and aside from their religion share many similarities with the Han majority, and the Uighurs, a Turkic-speaking people who have more in common with Central Asia.

Both are Sunni, but while the Hui are largely integrated into mainstream society, officials frequently blame religious extremism—along with terrorism and separatism—for violence in the Uighur homeland of Xinjiang.

China, which shares borders with Pakistan and Afghanistan, has strict national security laws, regularly detaining people for watching jihadist videos, although little evidence of any links to groups such as Islamic State has been made public.

Religious groups must follow the leadership of the Communist Party, President Xi Jinping told a government conference in April. “We should guide and educate the religious circle and their followers with the socialist core values,” he said, according to official news agency Xinhua. “We must resolutely guard against overseas infiltrations via religious means and prevent ideological infringement by extremists,” he added.

China’s leaders are keenly aware of the role the Catholic Church had in the fall of Communism in Eastern Europe, and have sought to curtail outside influence in everything from the Internet to universities. Islam has existed in China for over a millennium, entering with Arab traders on the Silk Road, some of whom settled permanently.

Now there are eight state-run Islamic institutes around the country, teaching young Muslims a version of Islam seen through a prism of Communist rhetoric and the Party-State system.

Wang, who is Hui, espoused his patriotism under a blackboard with an elaborate hammer and sickle drawn in the corner. In Arabic class, students recited in unison the words for “socialist core values” and “patriotism.”

“They recognize the conflict, but the Hui have been exposed to political propaganda for so long, especially the older generation in the 60s and 70s, they rarely talk about it,” said Timothy Grose, a professor of China Studies at Rose-Hulman Institute of Technology in Terre Haute, Indiana. “Hui Muslims have traditionally held a wide array of government and military positions throughout history,” he added. “Hui have been able to enjoy the benefits of state development. It’s easier to like a government that helped you become rich.”

Ningxia’s capital, Yinchuan, is a gleaming example, with newly built albeit mostly empty boulevards, street signs in Chinese, Arabic and English, and an annual China-Middle East trade fair. But not all imams are happy with the education provided at the state-run Islamic institutions.

“The teaching isn’t Islam, it isn’t religion, it’s official propaganda,” said one cleric at a mosque near the institute, who would only give his surname, Ma, due to the sensitivity of the topic. “The students get better job opportunities because they are more trusted,” he added. “The officials know they will be an imam that teaches what they are told.”

Religious schools attached to mosques run alternative classes devoid of patriotic education and Marxism, but any of their graduates must pass a government test before being allowed to preach to the faithful. “We don’t need the government to tell us about religion,” said Ma.

Many Hui Muslims go through the motions of promoting patriotism simply as a formality, Grose said, and then temper government propaganda in their sermons. But students at the Islamic institute, whose construction in the 1980s was largely financed by the Saudi Arabia-based Islamic Development Bank, preach the official line.

China has periodically persecuted religious believers, Muslims in particular, and third-year student Hai Jun cited his grandfather as saying the situation used to be “very difficult.”

“His generation couldn’t make the haj, but we can,” he went on, referring to the pilgrimage to Mecca all Muslims must make at least once in their lifetime. “Now we have so many more opportunities,” he said. “In terms of religious freedom, we don’t have much to complain about.”