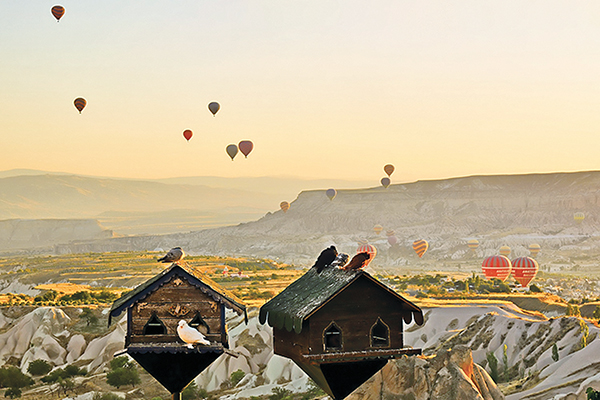 Courtesy of the Museum Hotel

Beyond Istanbul’s bustle, the rest of Turkey beguiles upscale travelers.

[dropcap]T[/dropcap]he surprising thing about the Museum Hotel is not what it is—a museum and a hotel—but where it is, in Cappadocia, in eastern Turkey.

For anyone who has traveled outside of Istanbul, there is the surprising slide in the quality of accommodation that occurs as soon as one leaves the city. Staffers rarely speak English, so when you ask for a salad they bring you a pillow. Water in the shower suddenly turns brown. While Turkey’s rapid economic growth (averaging 9 percent a year until recently) has received a great deal of attention, the fact that the wealth has led to the possibility of luxury travel throughout the country has been much discussed.

“The Museum Hotel is a property that has been expanding luxury in Turkey to areas beyond Istanbul,” says Christos Stergiou, who is the founder of True Greece—one of Greece’s leading luxury-tour operators and a company that has received acclaim in, among others, Condé Nast Traveler, the Financial Times, Travel and Leisure. He has recently expanded his brand to Turkey with True Turkey. “Until the last few years,” he says, “international-­level luxury was largely restricted to Istanbul. Because our guests expect a certain level of comfort, it was hard for us to take them out of the city.”

The Museum Hotel certainly speaks the language of what international travelers say they want: luxury combined with authenticity. Standing not so much on a plateau as inside a hill, the property is carved into a bluff that overlooks the cliffs and ravines and strange pillars that make Cappadocia resemble something out of a Dalí painting. Throughout the complex there are vitrines with ancient coins, jewelry, ceramics. Inside the rooms, there are mannequins draped with old textiles. The chef has won numerous awards and serves recipes that are centuries old.

As luxury hotels have been built, other vendors for the non-backpacking crowd have also come into existence. One of the classic experiences of visiting Cappadocia is an early-morning hot-air balloon ride. When I did this, as I floated above the eerie, silent landscape, the seams on the cliffs began to fill with red as if lava were running down them. The company that I chose for my ride, Royal Balloon, uses propane gas to inflate the balloon instead of the less expensive and slightly more dangerous butane gas, a detail pointed out to me by the pilot of my balloon. “We are now getting guests who are willing to pay for slightly better quality,” he said, “and so there are companies that are willing to provide such things.”

While Cappadocia is relatively new at providing luxury, Bodrum, a resort town on the Gulf of Gokova, has a long history as a leisure destination for international travelers. Even here, though, upscale visitors mostly stayed on their yachts. Over the past few years, the booming Turkish economy has led to a surge of luxury resorts being built around Bodrum. The most famous and luxurious of these is the Amanruya, which is about 20 minutes outside town. Driving to it, I passed resorts whose names were written in tacky gold letters and others that were still under construction and had cement trucks standing outside on the road.

The Amanruya is composed of 36 cottages built to resemble a Turkish village. The cottage walls are made of cement, but flecked with large stones and worked to resemble traditional mud walls. They stand in fields of wildflowers and olive groves. Part of what feels luxurious about the Amanruya is the sense of privacy and being part of the landscape. Some of the olive trees are a century old, and the cottages were built around them. Butterflies flutter all around. In the gutters that run down the sides of the lanes by the houses, turtles wander about.

While the Amanruya protects its olive groves, many of the hotels that are being built do not seem so ecologically sensitive. Some of the new hotels appear to have stripped bare the hillside that they are constructed on so that they completely reshape the landscape.

People have begun calling Bodrum the new Ibiza. Seeing the Amanruya and some of the new hotels, I wondered what the point was of visiting a location that had already been transformed. I posed this question to Stergiou. “Some people want to go to Ibiza,” he said. When I pressed him, he pointed out that travelers who focus on luxury tend to arrive when a destination has already been discovered. There are, he said, interesting places that have luxury but that haven’t been discovered. As an example, he offered Baku, Azerbaijan. “A fascinating city with an amazing culture and an extraordinary Four Seasons. The new Four Seasons is an amazing piece of architecture.”

A simpler way to experience both luxury and quiet is to go during the offseason. As for me, I was fortunate to be in Bodrum during early spring, long before the summer crowds arrived. Walking along the town’s cornice, hearing the water slapping below me, I felt that I had the best of all possible worlds.