Home Lightbox For the Love of Hussain

For the Love of Hussain 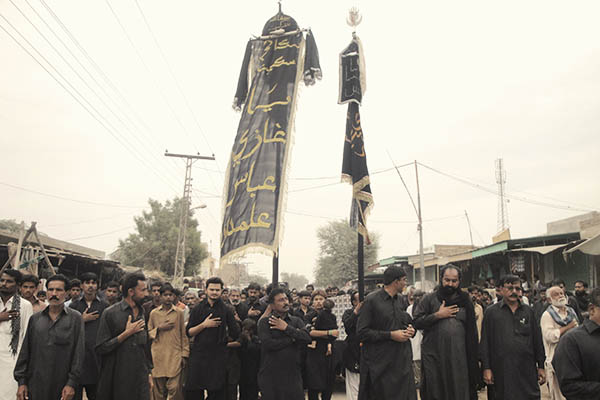 Earlier this month, as Shia Muslims around the world mourned the martyrdom of Imam Hussain—the grandson of Islam’s Prophet who was assassinated at the Battle of Karbala in 680—a small town in Pakistan’s Sindh province offered scenes of interfaith osmosis that date back several generations and that would be unthinkable anywhere else in the country.

Clad in funereal black, mourners in Samaro, Umerkot district, gathered around the alam, beat their chests, and wailed traditional Shia laments. “Ya Hussain, Ya Hussain.” But what made this procession different from others across Pakistan on Ashura, the day of Imam Hussain’s martyrdom, was that nearly half of the dozens who had assembled outside the town’s small Imambargah were not Shia Muslims but Hindus.

Hindus marking the Islamic holy month of Muharram is not unusual for Sindh, which borders India, home of Hinduism, and where about 6.84 million or 93 percent of Pakistan’s total Hindu population resides.

Sindh, once a Hindu-majority province of India, has long been the model of peaceful coexistence between communities of different faiths. This abiding spirit has roots in the Shia arrival in the province and their decision to assimilate by adopting, not resisting, local customs and traditions, according to historian Dr. Mubarak Ali. “The Ismaili [Shia] customs were rooted in tradition over religion,” he tells Newsweek, “and these traditions were close to the local culture of Sindhi Hindus.” By steeping themselves in existing customs, the Ismaili Shia endeared themselves to the Hindu population, which, in turn, accepted and embraced theirs.

Pakistan’s Shia, despite being Muslim, remain under mortal threat from Sunni militant organizations like Lashkar-e-Jhangvi and the Pakistani Taliban. The country’s Hindu population is even more marginalized. While it has been spared the periodic carnage that is visited upon the Shia and Christians, Pakistan’s Hindu countrymen number about 7 million, a population that is largely impoverished and absent any real mainstream representation. In all, Hindus account for 5.5 percent and the Shia up to 20 percent of the country’s 180-million population.

“Our forefathers started this tradition of mourning [with the Shia] centuries ago and we will continue it with coming generations,” says Kumar Sami, one of the Hindu co-mourners in Samaro who identifies himself as a ‘Hussaini Hindu.’ “It is more than just a religious observance … Imam Hussain accomplished something that has no rival in recorded history.” Imam Hussain, adds Sami, was a devta, a divine being, who sacrificed his life for humanity. The feeling is reciprocated by his Shia townsmen. “Why should we object to their participation? Imam Hussain was not just for Muslims, but for all of humanity,” says Zaman Khaskheli, another resident of Samaro, voicing popular sentiment. “We are happy that our friends are mourning with us.”

For Sindh, Samaro is not the exception. In Mirpurkhas, Shia Muslims celebrate the Hindu festivals of Holi and Diwali and Hindus honor Eid. By all accounts, the Shia and Hindus of Sindh share cultural traditions without prejudice or territorialism. The ‘Hussaini Hindus’ of Umerkot district take their love of Imam Hussain seriously. Unlike the Shia, they wear black throughout the year in respect and remembrance of Karbala. Some not only manage mosques but also organize Muslim gatherings. Others pray at mosques as a matter of routine. “We often visit [Shia mosques] throughout the year for worship,” says Dilip Kumar Malhi, a resident of Malhi Paro in Umerkot. During the first 10 days of Muharram, the ‘Hussaini Hindus’ who do not mourn alongside the Shia look after them by providing food and water.

Most of the ‘Hussaini Hindus’ belong to the 30,000-strong Sami community, which is also present in Sindh’s Badin, Dadu, Sanghar, Tharparkar, and Thattha. According to Haresh Sami, a journalist with the Sindhi language Daily Sobh, the Sami came to the Indian subcontinent from northern Europe—Sweden, Norway, Finland—where the bulk of the community (estimated at between 80,000 and 100,000) still resides. Many of the Sami men and women settled in Sindh for generations work as spiritual healers and ‘purifiers,’ going door to door with Benzoin extracted from trees in coal-heated iron pots offering to ward off ‘evil forces’ with the aid of the resin’s vanilla-smelling aroma for a small fee.

Some ‘Hussaini Hindus’ are even deemed experts on Islam. “Not just the Shia, but even Sunnis come to listen to me,” Heman Das, 82, tells Newsweek. Das, with his black attire and hennaed moustache and hair, has addressed Muslim gatherings in Rawalpindi, Lahore, and Peshawar. He says he came to admire Imam Hussain after he attended Muharram processions as a child. Speaking about Islam “doesn’t mean I am not a Hindu,” he says, “I am completely a good Hindu, but my love for Imam Hussain is based on research of religious books that have revealed that the Hindu god Shiva predicted Imam Hussain’s arrival and sacrifices.” He says the Bhagavad Gita, the holy book of Hinduism, contains this prophecy, which he discovered in 1977. “Since then I have become a zakir [one who believes in Allah] to explain the importance of mourning.”

The forefathers of these Hindus were friend of Prophet Mohammed and had fought with him in the war of Qarbala for the sake of their friendship. After the defeat of qarbala they had migrated to Punjab province in India where they are called Mohiyals. They are non- alming (begging) Brahmins. In several parts of India these non-begging Brahmins are predominantly known as BHUMIHARS. Though they have different names in different parts of India like Anvil Desai in Gujrat, Mohiyals in Punjab, Tyagis in Uttar Pradesh, Bhumihars in Eastern Uttar Pradesh and Bihar and so on and so forth. Still in different parts of India these BHUMIHARS still mourn the death of their friend on the occasion of Muharram.

What is your source of information that the Prophet (Peace be upon him) fought in the battle of Karbala? He never fought there.Correct your posting please.

Suerly would like to know, where does Shiva predict Haider. The very word Shiva predicted is problematic, as such concept is incompatible with Hinduism. But I will still keep my mind open till he tells me which text found it. Alaos would like to know about the adhyaya of Bhagvad Geeta predicts Hssain. The guy is most likely hallucinating, if not lying. But again, will keep an open mind till he tells me where in Geeta are these things given?