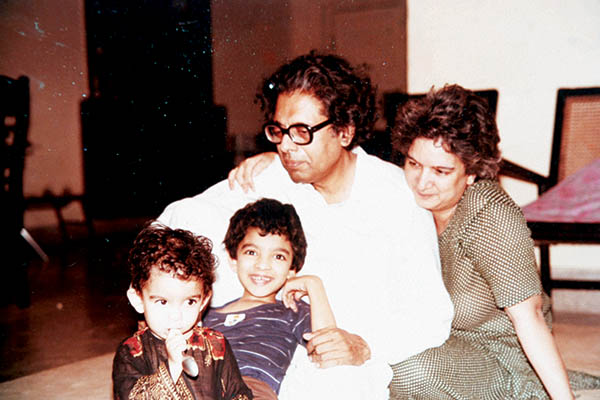 The woman who lit up our world

As far back as I can remember my sister Nigar Ahmad resisted any attempt to cage her spirit. In the holidays when we were encouraged to take music or art classes, Nigar went horse riding. Going to Kinnaird was a family tradition for girls. Nigar went to Government College. Single young men were discouraged to hang out at our house. So, of course, Nigar organized several get-togethers with them at home. All this was done without tantrums and sulks—regular methods employed by me to get my way.

Even when she wanted to get married she chose an unconventional venue, a place couples can only dream of: a beautiful spot facing a waterfall among the pristine environs of Swat. Our parents were out of the country (our father was on a World Bank mission in Uganda at the time), but Nigar still went ahead and the simple but meaningful ceremony was held with a few close people in attendance. The bride and groom clad in simple khaddar needed no adornment just like the scenery around them. The fact that we had to wade through a stream and climb a steep mountain, Dam Tor, to get there is another story. Later, when our parents returned, she happily accepted to be part of a larger celebration that included all family and friends.

It was this very quality that was displayed in abundance during all her years of activism. The refusal to back down, the spirit to challenge authority without being strident, just persisting with what she thought was right and not taking no for an answer.

She applied the same unconventional style to raising her children, Bilal and Ahmed “Puchu” Siddiqi. Nigar and Tariq Bhai’s world revolved around their kids. So naturally the boys assumed the entire universe was there to do their bidding. Across many family homes kids were heard saying:

“But Bilal and Puchu [Ahmed] scribble on walls.”

“But Bilal and Puchu are never scolded for breaking things.”

“But Bilal and Puchu aren’t forced to drink milk.”

So I sat down with my kids and told them that Nigar Khala was not doing the right thing by being so lax and that one day she will realize her mistake when she finds her children are bratty, badly behaved adults. But Bilal and Puchu ruined this by growing up as smart, wonderful, caring men. It’s going to take me a few more years to forgive them.

She even defied the ravages wreaked by Parkinson’s (which manifested in 2001) on her body and spirit, maintaining a cheerful exterior to the extent she could. Only once she said to someone: “This wasn’t meant to be.” I found that heartbreaking.

For many people, their work or ambition takes over their personalities. Several of them, having tasted the heady cocktail of success, fame and awards, assume an air of arrogance, entitlement and disdain for us lesser mortals. Till the end, Nigar, despite all the accolades heaped on her, remained a warm, compassionate, and generous human being. At her funeral a very large number of women told me how she changed their lives and inspired them to help others.

That it was a life to be celebrated and not mourned was amply demonstrated at the funeral ceremony on Feb. 25. It was decided that the namaz-e-janaza would be held at a home, not a mosque, so women could participate. Meena Rahman, one of her closest friends, immediately offered her spacious house and lawn. As the men gathered for the namaz, a row of women also stood at the back to offer prayers. When the time came to lift the body, the Aurat Foundation team along with friends and fellow activists sang the inspirational songs played at many women’s rallies. As if to complete this demonstration of equal participation for women on all occasions, when the funeral cot was lifted, one end of it was shouldered by her lovely daughter-in-law, Kate. Seeing this, a few other women stepped forward to share the ritual and defy convention. Nigar would have been proud. Giving women the confidence and courage to assume roles previously assigned to men only remains her most abiding legacy.

Someone in Lahore said Nigar was not just an activist, but a force. May the force remain with all Pakistani women forever. So rest in peace, Nigar. You lit up our world. But why do the lights seem a little dimmer now?

Rahim is a producer at TV One. She’s been a television actor and an advertising copywriter. She lives in Karachi.

What a lovely tribute! I was away performing, in Dubai, I think and didn’t know that Nigar had passed away. My deepest sympathies to Akhan Apa, Munna and Munni.And to her children, of course.

Beautiful . fitting . from a sibling’s heart.

Tariq Siddiqi and Nigar Ahmad both lived life their way and showed that unconventional, original ideas can also work, sometimes better than the received wisdoms and aphorisms many of us conformists live by.