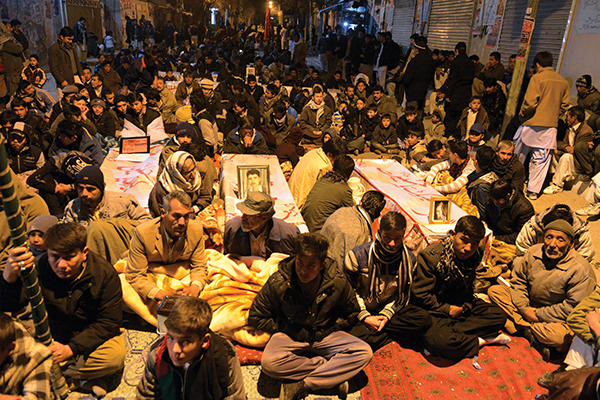 After the Jan. 21 bus bombing in Mastung, Balochistan, Shia protestors took to the streets across Pakistan to demand a military operation against the sectarian killers targeting them. In Quetta, they protested with the bodies of their slain, refusing to bury them until the Islamabad government—intent on reconciliation with the militants—took some action. On Jan. 23, interior minister Chaudhry Nisar Ali Khan flew to the Balochistan capital, met with protestors, and vowed a “targeted operation” against those killing the Shia. The protestors dispersed peacefully, and buried their dead the following morning. Around 6 a.m. on Jan. 24, Khan made good on his word. Around 350 Frontier Corps and police personnel launched an operation in Mastung and Panjgur districts and rounded up about two dozen suspected militants. Bus services were suspended, and pilgrims stranded at the Pakistan-Iran border town of Taftan were flown to Quetta on military aircraft. The government has also enacted a stringent and controversial new antiterrorism law, and the Pakistan military has conducted airstrikes in North Waziristan in retaliation for the back-to-back attacks on security forces. Begrudgingly, it seems Islamabad has finally abandoned its widely panned policy of talking peace with the terrorists.