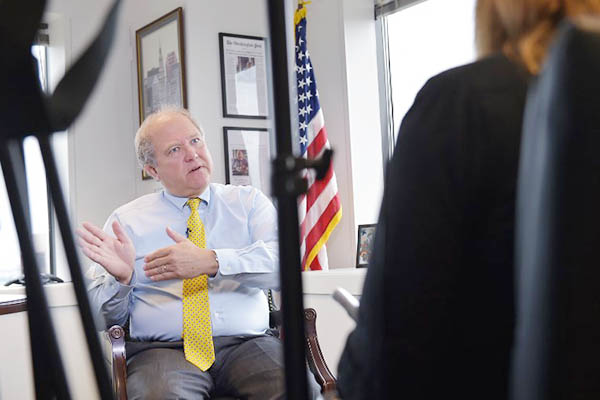 Foreign donors have flooded Afghanistan with more money than it can absorb, exacerbating corruption and fueling the drawn-out conflict, U.S. independent auditor John Sopko has said in an interview with AFP.

The comments by the U.S. government’s special inspector general for Afghanistan reconstruction (SIGAR) followed the recent stinging assessment of the World Bank’s handling of the Afghanistan Reconstruction Trust Fund (ARTF).

SIGAR found there was little oversight of how and where more than $10 billion contributed by 34 donor nations and agencies since 2002 had been spent. The World Bank also was unable to accurately evaluate the impact of the money.

Sopko said the mishandling of the ARTF highlighted broader problems with the many billions in foreign reconstruction spending in Afghanistan since 2001, adding the report was a “wake up call” for the international community. “We exacerbated it [corruption] by pouring too much money, too fast, [into] too small a country and the key is with too little oversight,” Sopko told AFP in Kabul. “We ignored corruption early on. We ignored the corrupt officials we were giving money to, the warlords, the petty bosses who then later grew extremely wealthy.”

Such corruption is helping to fuel the protracted conflict, now in its 17th year, by eroding support for the Afghan government and morale among its security forces “who are fighting and dying,” Sopko said.

His remarks came as SIGAR’s latest quarterly report showed a “sharp decline” in the number of Afghan military personnel, while the Taliban and other insurgent groups have gained increasing control over the population. The World Bank has conceded that it “agrees with much of the SIGAR report.”

Sopko also was searing in his criticism of Washington, particularly the State Department, and its failure to adequately support American operations in Afghanistan. Diplomats, aid workers and soldiers had been given a “box of broken tools” to rebuild the country, he said.

Pressure to spend money too quickly, short-term assignments and restrictions on travel beyond the U.S. embassy in Kabul had hampered reconstruction efforts.

“Our construction programs, our development programs are like an assembly line… if you try to slow it down you’re the monkey wrench,” Sopko said.

Deteriorating security across Afghanistan, particularly in Kabul, has resulted in many foreign embassies and organizations downsizing and tightening restrictions on personnel movements. That has led to outsourcing of project monitoring, “and they have assumed that would offer the same amount of accountability that their governments would demand,” Sopko said. “Reconstruction is not risk free… if you want total risk free, don’t come here.”

The lack of monitoring combined with excessive inflows of cash saw Sopko liken reconstruction spending in Afghanistan, which ranks 177 out of 180 countries in Transparency International’s latest corruption perceptions index, to a machine that “can’t stop.” Its “absorptive capacity,” which indicates the amount of money a country can take in before it is wasted, had been exceeded almost every year since 2002.

“We are committing to do more and we [SIGAR] are saying ‘Stop, take a deep breath, you don’t know how the money has been spent up to now’,” he said.