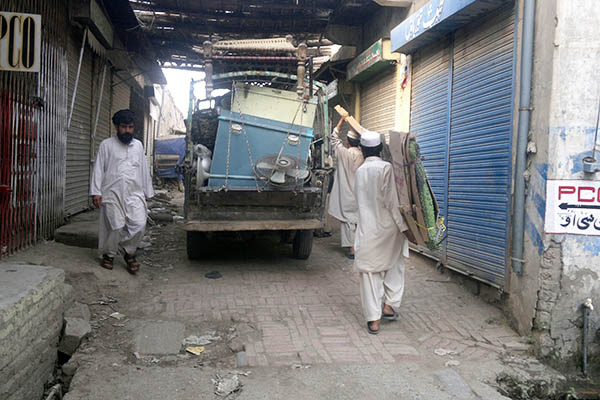 Some of the world’s most feared Islamist fighters are quietly slipping away from North Waziristan ahead of a long-rumored military operation, raising questions about the effectiveness of such intervention.

The exodus from the mountainous district on the Afghan border began in late May following Pakistani airstrikes, according to locals. But it has been hastened by the Taliban’s all-night siege of Karachi airport this week, which all but destroyed a tentative peace process.

On Wednesday night two U.S. drone strikes hit the region killing at least 16 in the first such attack this year, fuelling suspicion of coordination between the two countries, with Islamabad’s patience for talks seemingly exhausted. But as pressure builds for a fuller response to the airport assault, which was joined by militants from Uzbekistan, residents and officials in the district’s main town of Miranshah said the majority of foreign and local fighters had already left.

“Most of them have gone deep into the mountains towards the Afghan border,” said a senior security official. The locals said militant groups were also seen escaping from villages that are a known hub of the dreaded Haqqani network, an Al Qaeda affiliate known for its attacks against U.S. forces in Afghanistan.

Rumors of a ground offensive in North Waziristan, one of seven tribal regions along the border, have abounded for years. But authorities have held back from a final push—possibly fearing the blowback in Pakistan’s major cities such as Karachi, where 38 people including 10 militants were killed at the airport.

However, the sheer numbers of people leaving—some 60,000, according to official estimates, since late May—suggest that this time might be different.

They arrived during the early 2000s, lured by the fiery rhetoric of Osama bin Laden and the chance to fight “infidel” forces in Afghanistan. Married into the local population, some have erected mud houses in small villages among the area’s rugged mountains. Others “have rented houses and rooms here but they have now left towards the Afghan border,” said a grocery shop owner in Miranshah bazaar.

Another resident in Miranshah estimated that more than 80 percent of local and foreign fighters have left North Waziristan. The migrations began on May 22 when Pakistani F-16s pounded suspected targets, killing at least 75 according to the military.

Government representatives also began holding talks two weeks ago with a grand jirga, warning them to hand over foreigners in the area or face severe consequences. “Tribesmen are against war, they want to solve this conflict with talks and according to tribal traditions and that’s why we have formed a peace jirga,” said jirga chief Sher Mohammed. Residents said some jirga members last week made announcements from mosque loudspeakers in several villages asking foreign fighters to leave the area. They also made those under their command hoist Pakistani flags to demonstrate their loyalty and ward off aerial attacks.

Most areas along the border are not well demarcated, which allows militants to escape into Afghanistan. “They have moved toward Shawal and Birmal,” an intelligence official said, referring to remote villages on the Afghan border.

A second security official said: “It is good that they [fighters] are leaving. We hope that tribesmen will not allow them to come and settle here again. In case of any military operation, we will face less resistance.”

Residents said they have seen less activity of the feared Haqqani fighters in recent weeks. “They are also disappearing, probably they have gone to Khost, Paktia or Paktika,” said one resident in Miranshah, naming Afghan border provinces.

Imtiaz Gul, a security analyst and long-time observer of the tribal areas, said the jirga and other threats of full-scale action in North Waziristan appeared to be a deliberate strategy on Islamabad’s part. “This was probably done with a clear intent and that intent was to let them cross the border if they like. As long they cross the border—why should it be Pakistan’s headache? It’s then the headache of Afghan and coalition forces,” he said, adding that such movement had occurred in the past when Islamabad had launched operations in other parts of the tribal areas and in Swat Valley.

Which is why it was so difficult to engage jihadists in a fight in the area, as they could eventually return. “They keep going backwards and forwards—they can’t plug the entire border whether it’s Pakistani militants or foreign militants.”

I’d say, cleanse N/Waziristan of this malaise. Engage with the locals, empower them, develop the area and concentrate on all facets of human security, bring the populace into the political mainstream of Pakistan, and ensure that this area is never held hostage by these so-called Guardians of the Faith!