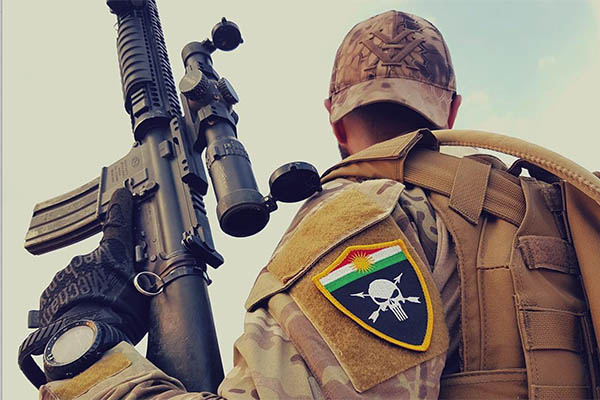 Growing numbers of Westerners appear to be trying to join the fight against the Islamic State group in Iraq before it’s too late, frontline volunteer warriors say.

I.S. group jihadists have suffered a string of setbacks in Iraq and Syria in recent months, including the loss of key towns and facilities surrounding the remaining major strongholds in their self-declared “caliphate”—Mosul in Iraq and Raqa in Syria.

Although limited or unreliable public data make it difficult to track numbers, anecdotal evidence suggests aspiring anti-jihadists—many of them military veterans—recognize they may be running out of time to fight I.S. in a pitched battle as the group loses territory and morphs into a traditional terror group.

The volunteers are eager despite being strongly discouraged—and sometimes banned by their home countries—from doing so.

With the fight for Mosul expected to begin in the coming months, U.S.-led coalition advisers, warplanes and drones are conducting “shaping operations” that will lay the battle groundwork.

Louis Park, a 26-year-old Texan who returned to Iraq’s autonomous Kurdish region for a second stint with local anti-I.S. forces in June, told AFP he had seen a sharp uptick in queries from aspiring Western fighters. “People know that the end is near and they are trying to get in while they can,” said the U.S. Marine veteran who served in Afghanistan.

Park, a Christian, has embedded with the Dwekh Nawsha, an Assyrian Christian militia working with U.S.-backed Kurdish peshmerga forces to protect the towns of Telskuf and nearby Baqufa, around 30km north of Mosul. “I’m getting inquiries from all around the world—60 or 70 since I’ve been back,” he said in a phone interview from close to the Baqufa frontline.

According to a study released last week by the London-based Institute for Strategic Dialogue, of the 300 or so foreign fighters it tracked via social media heading to fight the I.S. group, more than a third are Americans. The fighters are motivated by various factors, including wanting to make a difference or do something meaningful in their lives, and anger over a perceived inadequate international effort to counter the I.S. group’s barbaric acts.

“The primary grievance relates to atrocities being committed against civilians, with many accusing world leaders of turning a blind eye to the ongoing suffering of those caught up in the conflict,” the report said.

Park headed to Iraq largely because he missed combat and wanted to serve. “I don’t want to die, but I’d rather be in this position than someone who doesn’t have to be,” he said.

Another volunteer fighter who goes by the nom de guerre “Mike” said he is getting around a dozen messages a day from people who want to join the fight. A year ago, it would have taken him a week to get as many. The uptick in foreigners heading to the Iraq’s Kurdish region has put authorities in a bind, with increasing scrutiny of volunteers and the equipment they bring.

“My advice for them would be: don’t bother coming down here,” the former Norwegian soldier with Kurdish roots said in an email. “You will most likely not be allowed to fight and will leave broke and disappointed.”

The Kurdish government is under considerable pressure to keep Western volunteers away from the front line, he added. “So they often place them at inactive fronts or in camps, where they are safe and free to post pictures of themselves with gear and weapons on their Facebook page,” Mike, 31, said.

Instagram, Facebook and other social media sites are filled with images from volunteers—sometimes showing dead I.S. fighters, sometimes depicting the monotony of life on the front.

Park and Mike have garnered tens of thousands of followers under their Instagram handles, “louis_tex” and “peshmerganor,” respectively.

While most requests come from Americans, Mike said he’s received inquiries from Australians, Europeans and even from an Iranian. “I’m guessing people are realizing ISIS is coming to an end and want to be able to tell people back home they have fought them in the battlefield,” he added.

Different countries have different rules regarding nationals fighting alongside friendly foreign forces. The United States strongly discourages, but does not prohibit, such actions.

“Our ability to provide consular assistance to individuals who are injured or kidnapped, or to the families of individuals who die as a result of taking part in the conflict is extremely limited,” the State Department warned.

Some 250 private Americans have gone, or tried to go, to Syria and Iraq to fight, the FBI said last year, although it did not differentiate between those fighting the I.S. group and those joining the jihadists.

The agency did not provide more recent numbers.

U.S. Customs and Border Patrol said returning fighters, like all travelers, may be subject to extra scrutiny. “CBP does coordinate with other law enforcement agencies to provide the appropriate support as requested,” the agency said in a statement.

Other countries, such as Australia and Belgium, bar their citizens from fighting with foreign forces, even those perceived as friendly.