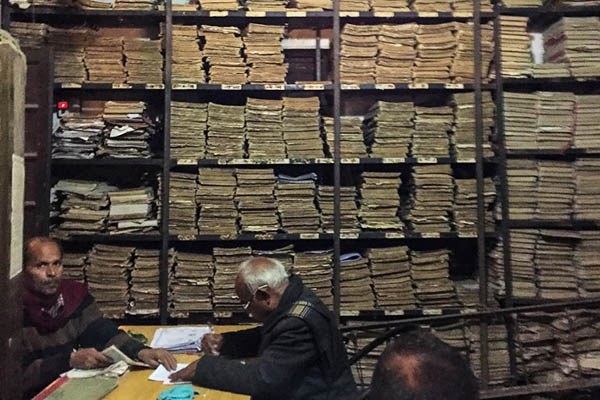 Indian government employees work next to stacks of files at the office of the registrar in the district court of Allahabad. Chandan Khanna—AFP

Officials say there has been limited progress in market reforms, making it hard to do business in South Asian nation.

Narendra Modi was elected two years ago this week promising to ease India’s notorious red tape and unpack regulatory tangles, but for foreign firms, doing business in the world’s fastest-growing large economy can still be a costly headache.

With a billion consumers and rising middle class, India holds dazzling potential—yet despite signs of change on the ground, high-profile corporate tussles continue to bamboozle investors. British firms Cairn Energy and Vodafone have this year been hit with fresh bills for billions of dollars in backdated tax and threats of asset seizure linked to long-running disputes.

Agribusiness giant Monsanto in March threatened to pull out of India over government plans to slash cotton seed royalties paid by local firms by about 70 percent to help farmers. And two major American business bodies this month voiced disappointment with the glacial pace of market reforms.

In a submission to the U.S. commerce secretary, the National Association of Manufacturers urged Washington to press for change during a visit by Modi in June. “Despite statements made by Prime Minister Modi and other senior Indian officials over the past two years, there has been limited progress in many key areas that make it challenging to do business in India,” the group wrote.

Modi took power after winning elections in May 2014 promising to make India “open for business,” seeking to replicate an impressive economic track record as chief minister in Gujarat and speed up a market opening that began 25 years ago.

The potential is breathtaking: India’s population will overtake China’s within six years and comprise 1.7 billion people by 2050, according to the U.N. But India ranks 130 out of 189 on the World Bank’s Ease of Doing Business index—the worst of all G20 countries.

Regulations vary capriciously across its 29 states, where even the same law can be interpreted in bafflingly different ways. “It is a hassle, it’s a pain, the amount of [tax] bills we get, the number of licenses we need,” the India head of one major European retailer told AFP on condition of anonymity. “Any store that we open, there are between 25 to 40 licenses. It’s just a mess.”

A much-reviled 2012 retrospective tax law has not been repealed, with telecoms giant Vodafone and oil explorer Cairn charged billions over previously cleared dealings. “The finance minister himself has said on more than one occasion that retrospective taxes have been an own goal,” said Naushad Forbes, president of the Confederation of Indian Industry. “They ruin our reputation and don’t bring us any revenue.”

Trade remains a bugbear, with U.S. exporters to India lamenting eye-wateringly high tariffs and protectionist restrictions, and years-long talks with the E.U. all but stalled. “One big conflict at the highest level [is] that the Modi government is very pro-investment but at the same time, very anti-trade access,” said Richard Rossow of the Center for Strategic and International Studies in Washington.

Even Facebook—personally courted by tech-loving Modi in Silicon Valley—ran into trouble with Free Basics, an initiative to give limited free Internet to the poor. After Indian entrepreneurs railed against corporate paternalism, Free Basics was blocked by the telecoms regulator, in a ruling ostensibly over data pricing.

Some suggest India’s buoyant economy, expected to have grown 7.6 percent this year, has bolstered nationalist tendencies.

While headline-grabbing corporate wrangles spook investors, many businesses say they see signs of change. Several executives told AFP they find civil servants more approachable under the Modi government and said a drive to bring a vast ocean of approvals online has had a tangible effect.

“We have certainly seen an improved willingness amongst some individuals in government organizations to close out historic project problems,” said Liz King, India managing director of engineering consultancy Mott MacDonald.

Hundreds of backdated tax cases have been quietly resolved and it appears new ones are not being taken forward, said Rossow of CSIS. “In the weeds there are good things happening,” he said.

The U.K. India Business Council said its members still cite legal and regulatory impediments as their biggest challenge to doing business in India. But, said its head Richard McCallum, things are moving faster. “It used to take three months to incorporate a company in India and now we are doing it in three weeks,” he said.