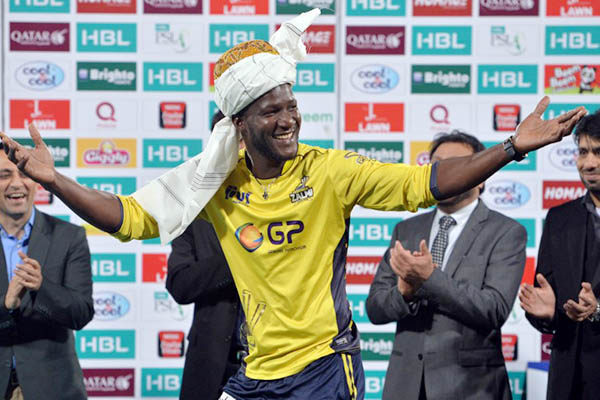 Foreign players have tentatively endorsed the return of international cricket to Pakistan after their whirlwind trip to Lahore for Sunday’s heavily guarded Pakistan Super League final.

Players including winning captain Darren Sammy detailed a journey involving bulletproof buses and closed roads, before they were rushed straight back to the airport with no time for celebrations.

The blanket security, deploying thousands of troops, military helicopters and armed guards on horseback, came after a deadly militant attack in 2009 on Sri Lanka’s team halted visits by top-level cricket teams. The rest of the Pakistan Super League was played in the United Arab Emirates, but Sunday’s incident-free final has opened the door to more international cricket with a World XI now scheduled to visit in September.

Several foreign players, including England’s Kevin Pietersen and Luke Wright, skipped the final over safety fears, but Sammy praised the arrangements in Pakistan. “Security was really tight,” the West Indian told AFP in Hong Kong, where he is playing this week’s T20 Blitz competition.

“I only thought about security when I was on the bus,” added the two-time World Twenty20-winning captain, who led Peshawar Zalmi to a lopsided victory over Quetta Gladiators. “Peshawar is like a family—once one foreign player was going there we were all going. It’s like a brotherhood.”

A resurgence of attacks—including a suicide blast which killed 14 in Lahore—had raised concerns, but the final’s successful staging was widely praised in Pakistan as a stand against militancy. Asked whether international cricket should now return, Sammy replied: “It’s not in my jurisdiction. Playing in Lahore was like playing anywhere in the world once I was in the stadium. The fans are just as passionate. It’s a small step in the right direction—time will tell.”

Teammate and England international Chris Jordan said he weighed his decision carefully and spoke with his family before opting to play in Lahore. “You have to ask the bigger heads over there” about playing more games in Pakistan. But he said he would be happy to return “with the same set-up.”

“That level of security did help to put the guys’ minds at ease so that we could get on with the game and put on the performance that we did,” said Jordan. “That level [of security] is a level that made everyone as comfortable as they needed to be.”

Another Peshawar player, West Indies all-rounder Rayad Emrit, was a late replacement for the final and traveled for 25 hours to play in Lahore. “There’s always risk if you’re playing in Pakistan. But to be honest when we got there I felt safe,” he said, calling the sold-out Gaddafi Stadium “electrifying.”

“We had armored vehicles, took us straight to the hotel. They closed off all the streets and then back to the ground where they did the same thing. From the game we headed straight to the airport… No time [to celebrate].”

None of the players said they had heard remarks from Pakistan legend Imran Khan, who in a leaked video called the final’s foreign players “third-class” and anonymous, drawing a heated response online. Khan later defended his comments, saying Sammy is “not a big player” compared to his fellow West Indian Chris Gayle, or Pietersen.