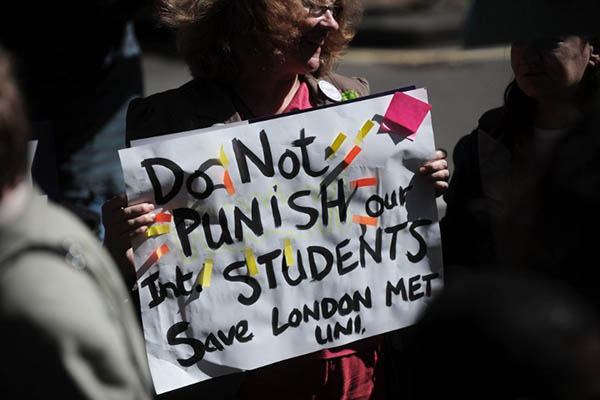 The number of international students attending England’s universities has dropped for the first time in three decades, a study said Wednesday, with students from India and Pakistan hit by tighter visa rules.

The Higher Education Funding Council for England found foreign student numbers declined by 1.5 percent in 2012-2013—the first fall in 29 years. Numbers fell to 307,205, down from 311,800 the previous year. The drop raises concerns that tougher immigration laws are driving away genuine students and risking the higher education sector’s income.

Meanwhile the trebling of annual maximum tuition fees to £9,000 a year is deterring European Union students, the report said. The numbers of full-time EU undergraduate entrants to English higher education institutions dropped from 23,440 last year to 17,890—a fall of 23.7 percent—which the study said was “probably due to the increased tuition fees.”

Heavy reductions in postgraduate entrants since 2010-11 have slashed numbers from India (51 percent, 7,000 students) and Pakistan (49 percent, 1,400 students). However, there was strong growth coming from China (44 percent, 8,300 students). The study found that almost as many Chinese students are studying full-time masters courses as English ones.

The University and College Union (UCU) said changes to the rules governing student visas and domestic concern about immigration were damaging Britain’s image abroad, giving the impression to students from India and Pakistan that they were not welcome. At the same time, other countries were striving to attract more foreign students.

“International students make a huge contribution to academic and cultural life on campuses and in our cities. They also make a valuable contribution to our economy,” said UCU general secretary Sally Hunt. “Ministers need to recognize that attempts to sound tough on immigration at home are also reported elsewhere and it is not surprising if students consider studying in the countries that make an effort to welcome them.”

Not long ago, students represented almost two thirds of the non-European Union migrants coming to Britain. The government believes the system is wide open to abuse, with obscure courses and colleges effectively offering a back door to settling in Britain.

A large proportion of international masters entrants studying full-time are from China—23 percent of entrants in 2012-13, compared with 26 percent from Britain.

“International students make a huge contribution—boosting our economy and enhancing our cultural life,” said a spokesman for the Department for Business, Innovation and Skills, which has responsibility for universities. “That is why there is no cap on the number of legitimate students who can study here. By working with other countries we will continue to attract international students and promote the U.K.’s expertise in education.”