One of the more horrific subtexts of Pakistan’s slide into anarchy has been the continuous killing of the Shia. While the facts of those killings are amply known, there has been little attempt to discuss whether there will be any political fallout from those killings, and if not, why not.

Traditionally, the Shia minority have not voted as a bloc. Instead, the Shia vote has split along the same ethnic, religious, and social lines as the Sunni vote. At the same time, one of the consequences of the recent increase in Shia killings has been an increase in Shia consciousness, especially among people who would not normally identify themselves in Shia terms. 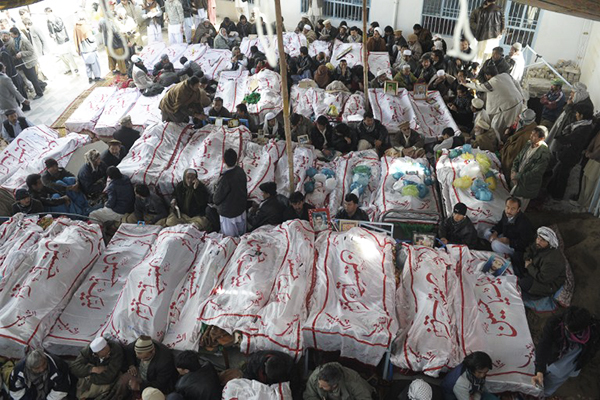 The increase in Shia killings should logically have resulted in two consequences. First, an attempt by the Shia of Pakistan to protect themselves in political terms by organizing themselves and bartering with other political actors—such as the Pakistan Tehreek-e-Insaf and the Pakistan Muslim League (Nawaz)—after all, a group which accounts for 20 to 25 percent of all Pakistanis has enough clout to change the course of an election. And second, an attempt by the major political parties to reach out to Shia Pakistanis. Neither has happened. Why?

So far as the failure of the Shia to organize is concerned, the answer is a combination of geography and incompetence. With a few significant exceptions (the killing of Dr. Murtaza Haider in February in Lahore, and the Abbas Town blast in April in Karachi), the vast majority of Shia killings have occurred in Balochistan, a location sufficiently removed from most Pakistanis (i.e., those not living in Balochistan) that they have come to the conclusion this is not really their headache.

There is also the undeniable fact that Shia leadership and organization had essentially fallen apart over the past decade and has yet to rebuild itself in a credible form. Finally, to the extent that the Shia community has organized representation, that representation tends to consist almost entirely of clerics. And while some clerics are effective politicians, the ability of Shia clerics to galvanize the larger community appears limited.

What then of the failure of the major political parties? In the case of the Shia-led Pakistan Peoples Party, the traditional refuge of the Shia voter, there seems to have been a general abdication across the governance spectrum of all responsibility in favor of more profitable ventures. So far as the PMLN is concerned, it has long had links with Maulana Ahmad Ludhianvi’s sectarian group, and has had no problems turning a blind eye to their shenanigans. But why did the PTI not make a serious play for the Shia vote?

PTI chief Imran Khan did make a few statements regarding Shia killings—especially against the Lashkar-e-Jhangvi—which went beyond the mealy-mouthed condemnations uttered by the PMLN. At the same time, the PTI never really took up the matter seriously. There was no substantial effort to reach out to the Shia community, no attempt to continuously highlight this issue, no attempt by Khan to present himself as the savior of the Shia. This leads to one of two possible conclusions: first, that Khan thought the issue did not need any more highlighting; and second, that he deliberately decided not to go further for fear it might hurt his chances.

I have no idea what eventually prevailed with Khan. But if he falls short in his ambitions on Election Day, it will be worth wondering whether he could have increased his haul by making more explicit and more sustained appeals to the Shia of Pakistan.

Naqvi is a senior lawyer based in Lahore. For updates, follow him on Twitter. (Editor’s Note: The headline of this piece has been changed. It was previously “Voters Who Political Parties Consider Shiite.”)

You clearly lack the faculties of research and have no idea how to process information.
One, Abbas Town blast was not really in Abbas Town but at a significant distance and the sunni deaths in that case were more than shia deaths.
Two, 502 shias died in 2012, around 6000 people died all over Pakistan, stop complaining about your 502, because the remaining 5500 were sunnis or of some other sect.
Three, the killings in Balochistan were mainly Hazaras being killed, who are coincidentally shias. The Hazari governor of Balochistan in 1980s killed a thousand pathans in a week, and now the Pathans are getting back and leveling the scores, so stop calling that issue as sectarian.
Four, you shias were at least allowed to protest in Balochistan. What happened when the mosque was bombarded in KP, and the protesters were shelled and sent home?! where were your facebook statuses and cover photos.
I condemn all killings regardless of religion and ethnicity. Killing a Christian, Jew, Shia, Aga Khani, Bohri or Sunni is equally wrong. Just because shias control the press they get the opportunity to whine and make more noise. Me and you are equally unsafe on the streets of this country. Stop crying, get up and make some practical contribution.

@An Awakened Muslim Mr.Naqvi is 100% write when he talks about tacit collusion of PML-N with the Terrorist ASWJ, but I fail to understand why he doesn’t mention the electoral alliance of the former Tehrik-e-Nifaz-e-Fiqh-e-Jafria ( no renamed as Islami Tehreek) with PPP. I feel that it is this ‘in-your face’ shia weds shia image, which turns the millitant sunni off. If PPP stops wearing Shiism on its sleeve, we would have a Shia Genocide Free Pakistan.

And not to forget, Mr.Naqvi too is married to a Shia-Juggun Kazim. Isn’t this why he too can be written of as a Shia defending his co-religionists and that too biasely without mentioning for once the mistakes made by our marja’s in the past to export the Iranian Revolution in Pakistan and teaming up with Shia elements in mainstream parties to pursue their narrow minded visions of a utopian shiite Pakistan?

Its time Millat-e-Jafria realizes its past mistakes, and vows not to repeat them. This would in future hopefully lead to a peaceful Pakistan which Jinnah envisaged