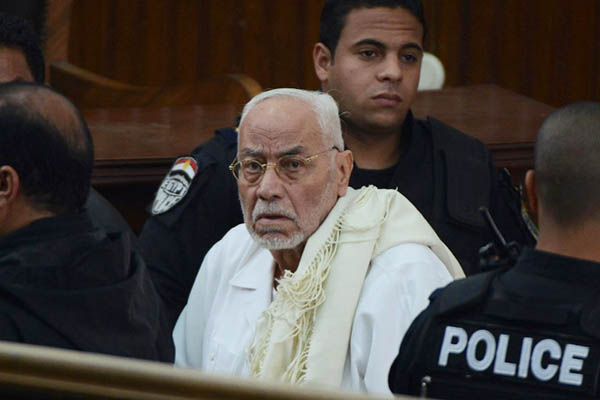 Former Muslim Brotherhood head Mohammed Mahdi Akef, who has died in hospital aged 89, helped turn Egypt’s Islamist movement into a major opposition force after spending much of his life behind bars.

His last spell in jail began in July 2013, after the military overthrew Islamist president Mohamed Morsi and jailed his supporters and fellow Brotherhood members. The Brotherhood’s now dissolved Freedom and Justice Party once called Akef “one of the historical leaders of the Brotherhood,” who served for more than 70 years.

Born in 1928—the year Hassan al-Banna founded the Muslim Brotherhood—Akef became deeply involved in it at a young age. After leading its student section, the former physical education instructor joined the group’s Guidance Bureau in the 1980s before being elected supreme guide in 2004, at the age of 76.

Under his leadership, the Brotherhood won 20 percent of parliamentary seats in 2005 elections, a major achievement for the then banned but tolerated movement. It became the most organized opposition force against president Hosni Mubarak’s regime, campaigning against police brutality, corruption and rampant inequality.

Mubarak was overthrown in 2011 after an 18-day uprising, which initially the Brotherhood did not endorse, as it was planned by other groups. But two days after larger than anticipated crowds showed up on Jan. 25, the uprising’s first day, the group announced its official participation—prompting a swift round-up of its leaders.

Unlike his predecessors, who remained at the Brotherhood helm until their death, Akef retired after a single six-year term. A representative of the conservative old guard known for his blunt speech, Akef often provoked controversy. For him, Israel was “a cancer to root out” and the Holocaust a “myth.”

After a failed assassination attempt against pan-Arabist leader Gamal Abdel Nasser in 1954, he was arrested and sentenced to life in jail. He was released 20 years later, when the new president, Anwar Sadat, was seeking Islamists’ support to gain legitimacy and weaken the left-wing.

Akef was appointed to a post in the reconstruction ministry.

In the 1980s, he left to Saudi Arabia and Germany, where he ran an Islamic center in Munich. On his return, he joined the Brotherhood’s Guidance Bureau in 1987 and was elected to parliament. But he was again sentenced to three years by a military court in 1996, this time under Mubarak.

Detained again after Morsi’s ouster, he was sentenced to life for his alleged role in the death of 12 anti-Brotherhood protesters who tried to attack the movement’s Cairo headquarters in June 2013.

The Court of Cassation overturned that verdict and ordered a new trial that left him behind bars. Ten months before his death, Akef had been transferred from jail to hospital in Cairo for cancer treatment.