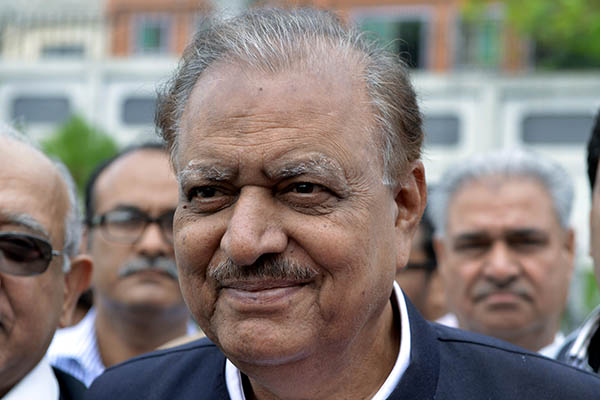 Former Pakistan president Mamnoon Hussain passed away in Karachi on Wednesday night after a prolonged battle with cancer, according to members of his family. He was 80.

The Pakistan Muslim League (Nawaz) loyalist served as the 12th President of Pakistan from September 2013 to September 2018. He was preceded by PPP’s Asif Ali Zardari and succeeded by PTI’s Arif Alvi. According to his family, he was diagnosed with cancer in February 2020, and had been admitted to hospital for the past two weeks. His funeral prayers would be offered after Asr in Karachi today (Thursday).

Born on Dec. 23, 1940 in Agra, Hussain moved to Karachi at Partition with his family. He completed his matriculation in the Sindh capital in 1958 and went on to secure a B.Com (Honors) degree from the Government College of Commerce. He subsequently gained admission to the Institute of Business Administration, from which he graduated in 1965.

A textile businessman who also dabbled in fruit exports, he aligned with the Pakistan Muslim League (Nawaz) in the 1960s, becoming its joint secretary in 1967. Prior to the 1999 military coup of Gen. Pervez Musharraf, he was appointed governor of Sindh from June to October 1999.

Upon his election to the presidency in 2013, Hussain resigned from the PMLN in a symbolic move to establish himself as a non-partisan president. Since stepping down in 2018, he had been mostly absent from politics and rarely made any political appearances.

Politicians and other dignitaries from all over Pakistan expressed their sorrow at the passing of Hussain and offered their condolences to the grieving family. In a posting on Twitter, President Alvi expressed sorrow over the death, while PMLN President, and Leader of the Opposition in the National Assembly, Shahbaz Sharif said he was shocked and grieved to hear of it. “Pakistan has lost a great public servant and PMLN an elderly statesman,” he wrote on Twitter.

Pakistan Army chief Gen. Qamar Javed Bajwa also issued his condolences in a statement issued by the Inter-Services Public Relations. “May Allah bless his soul and give strength to the bereaved family to bear this irreparable loss. Ameen,” read the statement.

“He was a sincere man who served Pakistan with completely honesty,” wrote PMLN Vice President Maryam Nawaz on Twitter, adding she was deeply saddened by the news.

Foreign Minister Shah Mahmood Qureshi also offered his condolences “May Allah grant his family the strength to bear this great loss,” he posted on Twitter.

Adviser to the Sindh C.M. Murtaza Wahab praised the former president for serving “his office with grace and dignity.”

The former president is survived by his wife and three sons.