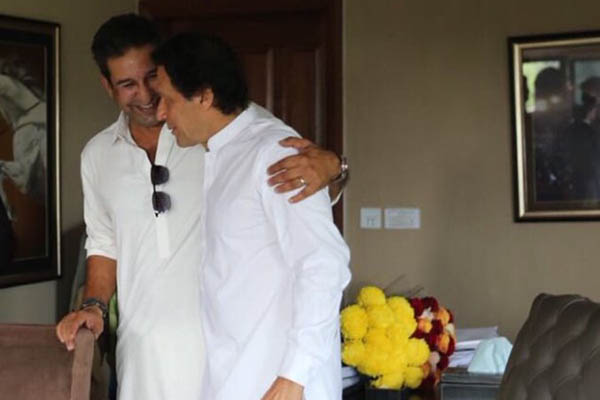 Imran Khan’s former cricket teammates and rivals have congratulated the World Cup winner after his party won the most seats in Pakistan’s general elections.

The Election Commission said on Friday that Khan’s Pakistan Tehreek-e-Insaf (PTI) party enjoyed a strong lead over the outgoing Pakistan Muslim League (Nawaz) but was short of an overall majority.

Khan will likely need to enter into a coalition to form a government.

“Congratulating the new Prime Minister of our country,” tweeted ex-bowler Wasim Akram, who was part of Pakistan’s 1992 World Cup winning side captained by Khan. Akram had thrown his support behind Khan, 65, in the run-up to the election. “It was in your leadership skip @ImrankhanPTI that we became world champions in 1992. It is in your leadership that we can again become a great democratic country,” he wrote on Twitter.

Akram’s new ball partner Waqar Younis—who also flourished under Khan’s tutelage—praised the leader-elect’s live broadcast to the nation on Thursday in which he claimed electoral victory. “A special speech from a Great Leader..Very simple, honest and practical..Feeling so proud to be a student of such a Mentor.. Congratulations Skipper,” he tweeted.

“Who could be a bigger and better example of a leader than Imran Khan, who as a super star had the world at his feet and yet elbow greased for 22 years to work for his objective and vision..he’s special and we are proud to have him as our Prime Minister,” Raja posted on Twitter.

Khan, who vowed to improve relations with rival India in his first comments following Wednesday’s polls, also received praise from across the border.

“Imran is the epitome of setting the bar high and reaching it. Congratulations & good luck to my cricketing hero, Imran Khan!” tweeted former Indian batsman Sanjay Manjrekar, who scored a double hundred against a Khan-led Pakistan in 1989.

Ex-Indian all-rounder Kapil Dev, who was a contemporary of Khan, tipped the former right-arm fast bowler to “deliver” as Pakistani leader in a TV interview. “It looks nice that a cricketer and one who we know is going to be the P.M.,” said Dev.

Current Pakistan players Mohammad Amir and Mohammad Hafeez also posted messages on Twitter. “Congrats to @ImranKhanPTI i hope u guys will do the best for Pakistan,” tweeted Amir. “Ma Shaa’ Allah @ImranKhanPTI U done it once again. Long marathon struggle against corruption. A man of strong belief,” wrote Hafeez.