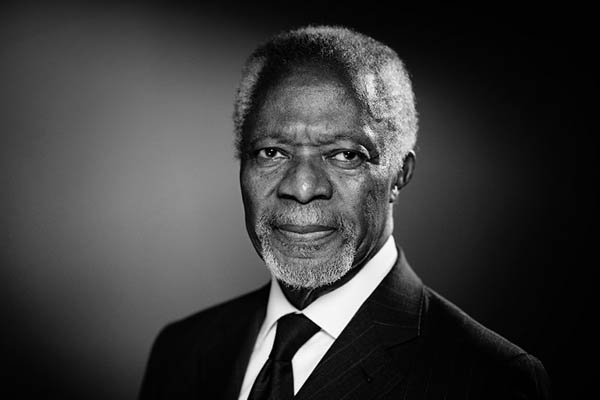 Former United Nations Secretary-General and Nobel Peace Prize laureate Kofi Annan died at the age of 80 on Saturday after a short illness, his foundation announced.

“It is with immense sadness that the Annan family and the Kofi Annan Foundation announce that Kofi Annan, former Secretary General of the United Nations and Nobel Peace Laureate, passed away peacefully on Saturday 18th August after a short illness,” the foundation said in a statement. “His wife Nane and their children Ama, Kojo and Nina were by his side during his last days.”

The Ghanaian national, who lived in Switzerland, was a career diplomat who projected quiet charisma and who is widely credited for raising the world body’s profile in global politics during his two terms as U.N. chief, from 1997 to 2006.

He quickly became a familiar face on television, with his name making newspaper headlines, and he was a sought-after guest at gala events and New York dinner parties.

Current U.N. chief Antonio Guterres voiced deep sadness at the news, describing his predecessor as “a guiding force for good.”

“In many ways, Kofi Annan was the United Nations,” he added. “He rose through the ranks to lead the organization into the new millennium with matchless dignity and determination. Like so many, I was proud to call Kofi Annan a good friend and mentor.”

The first secretary general from sub-Saharan Africa, Annan led the United Nations through the divisive years of the Iraq war and was later accused of corruption in the oil-for-food scandal, one of the most trying times of his tenure.

In 2001, as the world was reeling from the September 11 attacks, Annan was awarded the Nobel Peace Prize jointly with the world body “for their work for a better organized and more peaceful world.”

Born in Kumasi, the capital city of Ghana’s Ashanti region, Annan was the son of an executive of a European trading company, the United Africa company, a subsidiary of the Anglo-Dutch multinational Unilever. After ending his second term as U.N. chief, Annan went on to take high-profile mediation roles in Kenya and in Syria. He later set up a foundation devoted to conflict resolution and joined the Elders group of statesmen, which regularly speaks out on global issues.

The U.N. high commissioner for human rights Zeid Ra’ad Al Hussein said he was grief-stricken over Annan’s death. “Kofi was humanity’s best example, the epitome, of human decency and grace. In a world now filled with leaders who are anything but that, our loss, the world’s loss becomes even more painful,” he said. “He was a friend to thousands and a leader of millions.”