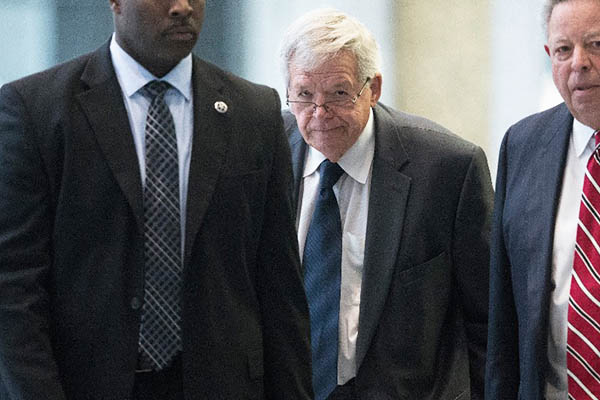 New details reveal Republican lobbyist preyed on the teenagers while he was a high school wrestling coach.

The 74-year-old Republican lobbyist pleaded guilty in October to illegally structuring $1.7 million in bank withdrawals over 4.5 years that prosecutors identified as hush money. Prosecutors said they expected Hastert to serve a sentence of up to six months, taking note of his ill health but indicating that he could continue to receive medical care and medication while in prison.

The statute of limitations has long passed on the abuse, which took place when Hastert taught and coached at Yorkville High School in Illinois from the 1960s to the 1980s. In detailing the abuse for the first time, prosecutors said Friday that it involved Hastert’s “intentional touching of minors’ groin area and genitals or oral sex with a minor.”

It is an incredible fall from grace for the man who served as speaker of the House of Representatives from 1999 to 2007, making him at the time just second in line to the presidency.

Hastert gave two boys, in separate instances, a massage in the locker room before performing an unspecified sex act on them, according to prosecutors. One of those boys indicated that the coach would sit in a recliner chair “in direct view of the shower stalls in the locker room where he sat while the boys showered.”

Stephen Reinboldt, who died in 1995, was abused by Hastert throughout his time in high school in 1967-1971, according to his sister and others. During a massage session, Hastert brushed his hand over another boy’s genitals who found it “very weird.”

The youngest boy, identified as Individual A, was at the heart of the banking withdrawals. Prosecutors said the money served “to pay an agreed-upon total of $3.5 million to compensate” the boy after Hastert made him stay in his motel room during a wrestling camp and massaged his groin area.

“Defendant used his position of trust as a teacher and coach to touch a child’s genitals and then undress and ask the child for a back massage in a motel room,” prosecutors wrote of that encounter. “There is no ambiguity; defendant sexually abused Individual A.”

In his filing, Assistant U.S. Attorney Steven Block accused Hastert of “stunning hypocrisy.” Hastert wrote in a 2004 memoir, “There’s never sufficient reason to try to strip away another person’s dignity.”

Pakistan’s Ulema Seek Ban on ‘All Sources’ of...