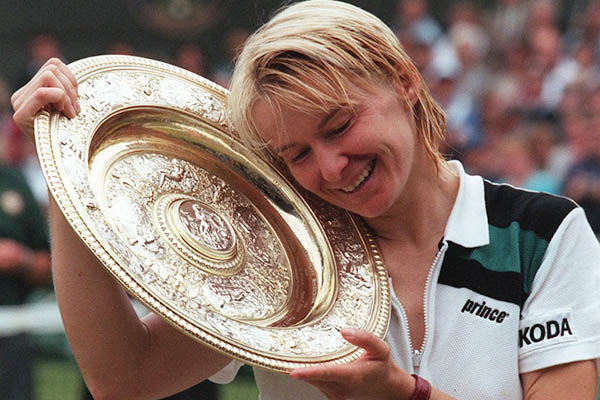 The Czech native died after a long battle with cancer, according to official statement

Emotional tributes from across the world of tennis poured in for former Wimbledon champion Jana Novotna on Monday after she died at the age of 49 following a long battle with cancer.

Novotna won the Wimbledon title in 1998 beating Venus Williams and Martina Hingis on the way to her victory over France’s Nathalie Tauziat in the final. After a long battle with illness she died on Sunday in her native Czech Republic surrounded by her family, a WTA statement said.

She played in two other Wimbledon singles finals, losing to Steffi Graf in 1993 and to Hingis in 1997.

The picture of a distraught Novotna being comforted by the Duchess of Kent after losing the 1993 final when she had led 4-1 in the final set is one of the memorable Wimbledon moments.

Novotna, a runner-up to Monica Seles at the 1991 Australian Open, also won four Wimbledon doubles titles with compatriot Helena Sukova in 1989 and 1990, with Arantxa Sanchez-Vicario in 1995 and with Hingis in 1998. Wearing her distinctive headband, she won doubles titles at all four Grand Slam tournaments—triumphing 12 times in the women’s doubles and on a further four occasions in the mixed event.

Czech-born American great Martina Navratilova led a number of players—both past and present—in expressing deep sorrow at Novotna’s death. “The tennis world is so sad about the passing of Jana Novotna… I am gutted and beyond words… Jana was a true friend and an amazing woman…” tweeted Navratilova, a winner of 18 Grand Slam singles titles and a combined 41 doubles crowns. “A sad loss to the tennis world, but a devastating loss to those of us who shared a deep friendship with her…a woman with integrity and honor. RIP Jana,” added former American star Chris Evert, who also won 18 major singles titles.

“Jana was as kind as she was athletic, as smart as she was competitive. I can’t believe she is gone this soon. Her smile lives forever young,” Shriver tweeted.

Czech star Karolina Pliskova, the former world number one and 2016 U.S. Open finalist, also paid tribute to her fallen compatriot. “So sad to hear about Jana Novotna. She will be always the champion for me. RIP,” Pliskova tweeted.

Lucie Safarova, the 2015 French Open finalist, posted an image on Instagram of Novotna clutching the Wimbledon trophy after her 1998 victory at the All England Club. “Still shocked about this terrible news…you will be always remembered as our legend amazing athlete and a great person!” said Safarova.

Spain’s 1994 Wimbledon champion Conchita Martinez spoke of her grief at learning of Novotna’s demise. “What sadness to start the day with this terrible news, Jana Novotna leaves us too soon. RIP JANA, you will be missed,” Martinez said on Twitter.

Steve Simon, chief executive of the WTA, said: “Jana was an inspiration both on and off court to anyone who had the opportunity to know her. Her star will always shine brightly in the history of the WTA. Our condolences and our thoughts are with Jana’s family.”

Born on Oct. 2, 1968, Novotna won a total of 24 singles tournaments and 76 doubles tournaments in a career that spanned from 1987 to 1999. She reached a high of world number two and became the oldest first-time Grand Slam singles champion at 29 years and nine months—a record since eclipsed by Francesca Schiavone and Flavia Pennetta.

Novotna also won the Fed Cup with the former Czechoslovakia in 1988, as well as two Olympic doubles silver medals, and a bronze in singles at the 1996 Games in Atlanta. She was inducted into the International Tennis Hall of Fame in 2005.