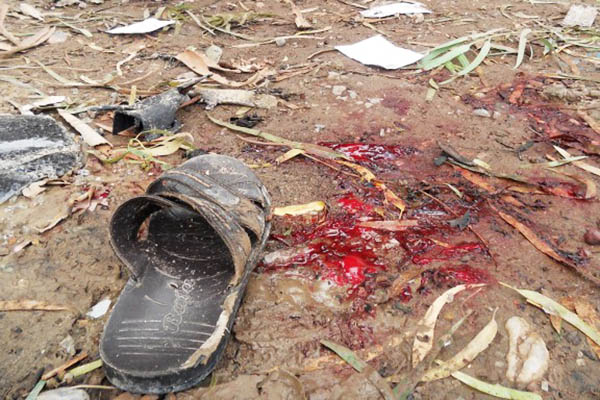 Four people were killed and 14 others wounded in an explosion at a mobile phone market in southeastern Afghanistan on Sunday, officials said, in the latest attack to hit the war-weary country.

The deadly blast comes as the Afghan government considers a plan to arm 20,000 civilians to fight the Taliban and other insurgent groups which have gained ground since U.S.-led NATO combat troops left in 2014. “The blast happened at around noon in a market where people go to download music and videos to their mobile phones,” said Khost provincial police chief Faizullah Khairat. He said the explosion was caused by a “remote controlled bomb.”

Khost health department director Habib Shah Ansari confirmed four people had been killed and said “over a dozen wounded” had been taken to hospitals in the provincial capital of the same name. There was no immediate claim of responsibility for the attack but the volatile province bordering Pakistan is contested by the Taliban.

Music was one of the many forms of entertainment banned during the Taliban’s 1996-2001 rule and the militants have previously attacked such markets. The province has come under attack by the Taliban in recent months.

As Ramzan began on May 27, a Taliban car bomber targeted a CIA-funded Afghan militia group, leaving 13 people dead and six injured in Khost. It was the deadliest Ramzan since the U.S.-led invasion in 2001 with over 200 killed and hundreds wounded, according to an AFP count based on official figures, underscoring the deteriorating security situation.

Afghan security forces have been struggling to beat back a resurgent Taliban, which last month vowed to make Afghanistan a “graveyard” for foreign forces after U.S. President Donald Trump made an open-ended commitment to keep American boots on the ground. As it searches for a security quick fix, the Afghan government is considering a proposal to train and arm civilians to defend territories where Islamic militants have been driven out.

The plan has sparked concern the local forces could become another thuggish militia and end up terrorizing and abusing the people they are supposed to defend. In Afghanistan, militias—private armies and government-backed armed groups—have a long and checkered history and many Afghans are wary of them.