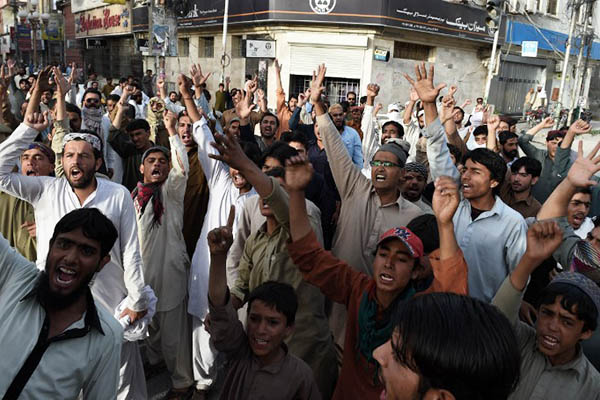 Another eight wounded as Shias and Sunnis clash in Balochistan capital.

At least four people were killed and eight others wounded on Monday when sectarian clashes broke out in Quetta, police said.

“Three members of the Shia Hazara tribe were killed by the unknown gunmen, while a Sunni man died in the wake of the firing by protesting Hazara youth,” said city police chief Abdul Razzak Cheema. “Eight others, including two Shia women, received bullet injuries,” he said.

The violence was sparked when an old man of the Hazara community was gunned down in a teashop in the Meezan Chowk area of Quetta, the capital of Balochistan province. Some 500 youths from the minority took to the streets in protests bearing the body of the elderly man, staging a sit-in outside the office of the inspector general of police. But their demonstration turned angry when it emerged another two Hazara men had been killed when gunmen stormed a medical clinic, injuring two women including one who was pregnant with their indiscriminate fire.

News of the second attack infuriated the demonstrators, some of whom were armed, who went on a rampage around the city and opened fire on a crowd outside a Sunni mosque, killing one and injuring five.

Another senior police official in the area, Qasim Sacheli, confirmed the causalities.