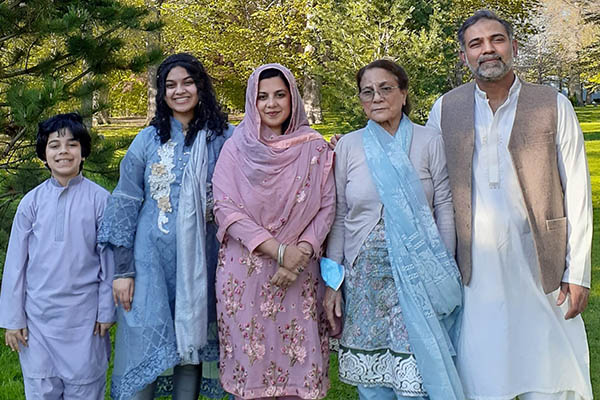 A man on Sunday evening rammed his pickup truck into a Muslim family in Canada’s Ontario province, killing four people in what has been described by police as a “premeditated” attack.

Police in London, Ontario, said 20-year-old Nathaniel Veltman had jumped the curb with his vehicle while the family was waiting at an intersection, striking five members of the family before driving off at high speech. The accused has been taken into custody by police and charged with four counts of first-degree murder and one count of attempted murder. He has been remanded into police custody and is due in court on Thursday.

“There is evidence that this was a planned, premeditated act, motivated by hate,” Detective Superintendent Paul Waight of the London police department told a press conference. “We believe the victims were targeted because of their Islamic faith,” he said, adding that prosecutors were considering filing terrorism charges against the accused. He is not known to be a member of any hate group, and does not have a criminal record.

According to local media, the targeted family immigrated from Pakistan around 14 years ago. The victims been identified as Syed Afzaal, 46, his wife Madiha Salman, 44, and their 15-year-old daughter, Yumnah Afzaal. Syed Afzaal’s 74-year-old mother also died. The couple’s 9-year-old son, Faez Afzaal, is in the hospital with serious but non-life-threatening injuries.

The attack was the worst against Canadian Muslims since 2017, when a man gunned down six members of a Quebec City mosque. London Mayor Ed Holder said it was the worst mass murder the city had ever seen. “We grieve for the family, three generations of whom are now deceased,” he told journalists. “This was an act of mass murder, perpetrated against Muslims, against Londoners, and rooted in unspeakable hatred.”

In a statement, the Afzaal family called on Canadian citizens to unite against the “destruction of a family in the brutal and horrific manner” perpetrated by the attacker. “We need to stand against hate and Islamophobia and raise awareness in our communities and throughout all political spectrum,” they said. “This young man who committed this act of terror was influenced by a group that he associated with, and the rest of the community must take a strong stand against this, from the highest levels in our government to ever member of our community with a sense of appreciation for humanity and justice.”

Canadian Prime Minister Justin Trudeau, in a posting on Twitter, said he was “horrified,” adding that “Islamophobia has no place in any of our communities. This hate is insidious and despicable—and it must stop.”

Pakistan Prime Minister Imran Khan, in a posting on Twitter, expressed his sorrow over the attack on the family. “This condemnable act of terrorism reveals the growing Islamophobia in Western countries. Islamophobia needs to be countered holistically by the international community,” he added.