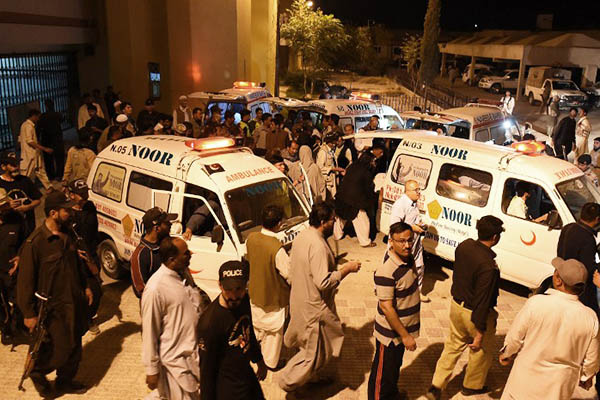 Gunmen riding a motorcycle opened fire on a moving bus in Pakistan and killed four women from the Shia Muslim minority in an apparent sectarian attack, officials said on Tuesday.

The gunmen sprayed the vehicle with bullets in the outskirts of Quetta city, the provincial capital of Balochistan province.

“At least two motorcycle riders on one bike fired at the bus when it reached close to Hazara town. Two people, one male and another female, were also wounded in the attack,” said Abdul Razzaq Cheema, a senior police official. “The bus was traveling from one locality of Hazaras to the other,” Cheema said.

There was no immediate claim of responsibility but Taliban militants have attacked Shia Hazaras in the past.

Sectarian violence—in particular by Sunni hardliners against Shias who make up roughly 20 percent of Pakistan’s 200 million people—has claimed thousands of lives in the country over the past decade. In May last year, 43 members of the Shia Ismaili minority were killed when their bus was stopped and riddled with bullets in Karachi by militants claiming Islamic State group affiliation.

Balochistan, which borders Iran and Afghanistan, has oil and gas resources but is afflicted by Islamist militancy, sectarian violence between Sunni and Shia Muslims and a separatist insurgency.