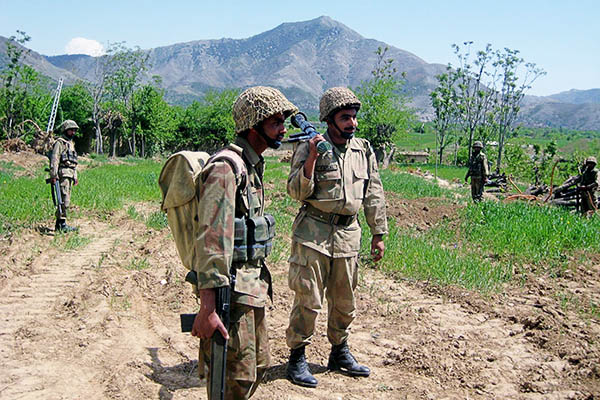 Terrorists from across Pak-Afghan border fired on Pakistani checkposts in the third such incident since May 25.

At least four soldiers were killed and four others injured, including an officer, after terrorists from across the Pak-Afghan border fired on a military checkpost early on Wednesday morning.

“Terrorists from across the border fired on Pakistani border posts at Manozangai and Mukha Tops,” said a military official on condition of anonymity, adding, “Two soldiers were killed while three others were injured, including an officer.”

An official of the political administration also confirmed the attack. Later, the military official said that another two soldiers had been killing in firing on the Mukha Top checkpost. “Since morning, a total of four soldiers have been killed and four others injured,” he added.

On May 31, around 150-200 terrorists from across the border attacked several Pakistani checkposts on Nao Top of Bajaur Agency, killing at least one soldier and injuring two others. Pakistani gunship helicopters repulsed the attack and killed 16 terrorists.

“It is the third such an incident of cross border attack since May 25,” said the military official.

Pakistan’s Foreign Office condemned the attack in a statement. It said the matter had been raised with the Afghan government in Kabul and with its embassy in Islamabad. “It has been emphasized that Afghanistan must take concrete steps to stop the use of its territory against Pakistan,” it said.

Islamabad lodged a protest over the May 31 attack with Afghanistan’s deputy ambassador in Islamabad while the Pakistani ambassador in Kabul raised the matter with the Afghan foreign ministry. Both countries frequently accuse each other of backing cross-border attacks by militants.