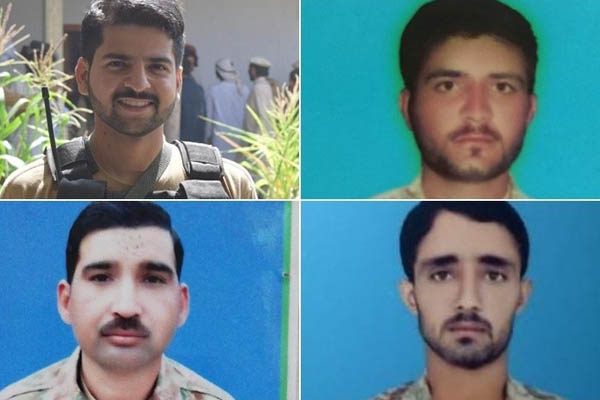 A lieutenant, two sepoys and a lance havaldar were martyred in a military operation targeting a militant hideout in North Waziristan that also left seven terrorists dead, read a statement issued by the Inter-Services Public Relations (ISPR) on Wednesday.

“On confirmed intelligence about presence of terrorists in a hideout near Datta Khel, North Waziristan district, security forces conducted an IBO [intelligence-based operation] in Mama Ziarat, 7km southwest of Datta Khel,” it said, adding that the terrorists had opened fire on the security forces in a bid to flee after troops cordoned off the areas.

According to the military, in addition to the four personnel who embraced shahadat during the exchange of fire, one soldier was injured. “[A] large cache of arms, ammunition and IEDs was recovered from the hideout during clearance,” it added.

The martyred personnel were: Lt. Agha Muqadas Ali Khan, 26, from Lahore; Lance Havaldar Qamar Nadeem, 36, from Layyah. He is survived by a wife, two sons, and a daughter; Sepoy Muhammad Qasim, 24, from Layyah; and Sepoy Tauseef, 23, from Narowal.