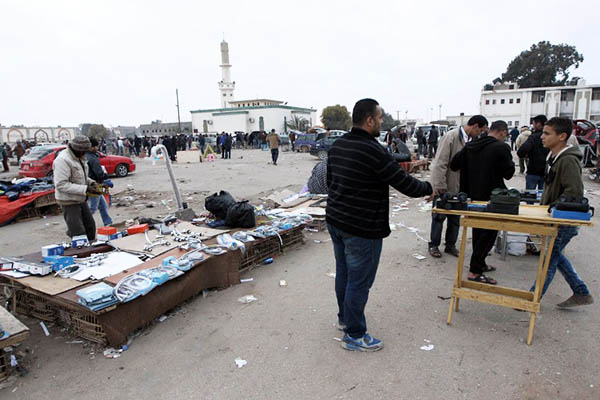 Libyans at a market set up on the grounds of Muammer Gaddafi’s former palace in Benghazi. Abdullah Doma—AFP

The palaces of Libyan leader Muammar Gaddafi have been reduced to garbage dumps and pet markets.

The sprawling palace compounds from which Libyan leader Muammar Gaddafi ruled for four decades have been reduced to garbage dumps and pet markets by the 2011 revolution which toppled him.

In the heart of Tripoli, the once feared but now humbled Bab al-Aziziya compound resembles a wasteland. During his rule, Libyans would be nervous just walking anywhere near the fortress-like seat of the Gaddafi regime. “People were afraid even to look at the walls, for fear of being arrested,” said Hassan, a Tripoli taxi driver.

All that remains of the compound, which had been hit in a 1986 U.S. airstrike before being pounded by NATO four years ago, are a few ruined buildings, the green flooring of Gaddafi’s home and a dug-up network of underground tunnels.

The monument of a gold-colored fist clenching a U.S. fighter plane was vandalized and sent off to Misrata, a rebel bastion during the revolt which ousted and killed Gaddafi.

At a safe distance from his people, Gaddafi lived behind fortified walls with his wife, their children, close advisers and guards. Apart from the bedouin tents on which Gaddafi prided himself and which accommodated him on travels abroad, the compound once showcased a zoo, an indoor pool, countless murals and a fairground in its gardens. Gaddafi had expanded the grounds by knocking down adjacent neighborhoods.

Bab al-Aziziya “was a symbol of the Gaddafi era. Today, we have destroyed this symbol, we have demolished and razed it to the ground,” said Adel Mohammed Farina, tourism ministry spokesman of a Tripoli-based government. “He [Gaddafi] will be mentioned briefly in history books and documentaries but nothing of his will remain as it is,” said Farina.

Rebels hastily bulldozed much of the compound when they captured it in August 2011. Homeless families moved into the few buildings left standing, and initial plans to turn Bab al-Aziziya into a national park have not materialized.

The walls are splattered with graffiti and revolutionary slogans—some with the names of fighters killed in the battle for the compound.

Another of Gaddafi’s homes in Sabha in the south of the country has suffered the same fate.

In the eastern city of Benghazi, birthplace of the revolution and which has since become an Islamist stronghold, traders have converted his more than 10-hectare palace grounds and barracks into a marketplace to sell birds, dogs and other pets. “We dreamt of a better life after the fall of Gaddafi, but here we are in his ruins,” sighed Mohammed Suleiman, 43, surrounded by children. “This is a powerful message to the new rulers of Libya. If Gaddafi had given us freedom and treated us with dignity, with a decent standard of living, he would still have been here.”

In 2012, the Islamist group Ansar al-Sharia, which the United States has branded a terrorist organization, occupied Gaddafi’s Benghazi home and turned it into their headquarters. It was pulverized in airstrikes launched last October by anti-Islamist forces loyal to the internationally recognized Libyan government based in the country’s far east.

Now, the area is used as a dumping ground where the city’s municipality burns household rubbish. “This place is not worthy of being anything but a dump. It reminds us of a black chapter in our history and many painful memories,” said Ali al-Masrati, a passer-by.