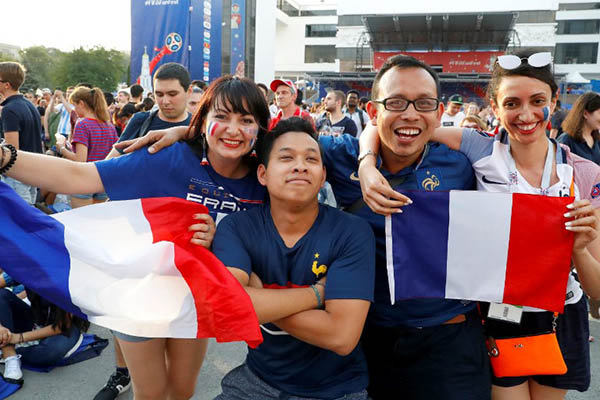 France will unleash the attacking talents of Kylian Mbappe and Antoine Griezmann against Eden Hazard’s gifted Belgium side in Saint Petersburg on Tuesday with a place in the World Cup final at stake.

The semi-final matchup of the European neighbors promises to be full of intrigue as France aim to return to the final for the first time since a Zinedine Zidane-led team did so in Germany in 2006.

Belgium will be seeking to break new ground by reaching the final for the first time in their history—indeed they have only reached the semi-finals once before, in 1986. The winner will face either Croatia or England, who play on Wednesday, in Moscow’s Luzhniki Stadium on Sunday.

With Eden Hazard pulling the strings and Romelu Lukaku providing the firepower, Belgium have what it takes to beat France. But their secret weapon could be on the sidelines in the shape of one of France’s greatest players of all time, Thierry Henry, who is now head coach Roberto Martinez’s assistant.

Former Arsenal and Barcelona forward Henry was part of the French squad that won the World Cup on home soil 20 years ago and played 123 times for his country, scoring 51 times.

Now it is his job to halt the run of his home nation. “He will be feeling divided loyalties tomorrow,” France goalkeeper Hugo Lloris said on Monday. “He is first and foremost French. But tomorrow, on a professional level, he will be putting all the passion that drives him into the Belgian team.”

Belgium’s Kevin De Bruyne said Henry had talked little about his feelings. “Perhaps he will sing the Marseillaise [before the game], which I find normal,” De Bruyne said. “It might be a bit difficult for him but he’s working for Belgium now, he wants us to win.”

Belgium’s confidence will be high after knocking out Neymar’s Brazil in the quarter-finals and they are the only team to have won all their matches in Russia, top-scoring with 14 goals.

Didier Deschamps’ France side failed to fire in their group matches but burst into life in the 4-3 demolition of Argentina as Mbappe overshadowed Lionel Messi and announced his arrival as a new superstar of the game.

The French then showed their steel in the 2-0 disposal of Luis Suarez and Uruguay in the quarter-finals. France are favorites because of their mix of youth and experience allied to tournament nous after they reached the Euro 2016 final.

As World Cup fever builds at home, England are avoiding the hype as the coach Gareth Southgate prepares his team in their tranquil base near Saint Petersburg for their first semi-final since 1990.

While many England fans are surprised by the unheralded team’s progress, midfielder Dele Alli says the squad always believed they could go far. “We had to believe and we know how talented we are as a squad,” he said. “We know we have some unbelievable players and a great manager and everyone is clear on what we want to do. When you have such a solid foundation, you have the basics and clear understanding of what we want to do and achieve, it’s not a surprise that it’s going well for us.”

Southgate has told his players they have the potential to be bigger heroes even than the team featuring Bobby Moore and Bobby Charlton that win on home soil in 1966.

Captain Harry Kane is leading England’s charge with six goals so far, putting him top in the race for the Golden Boot. Lukaku is on four goals and Griezmann and Mbappe have three each.

Croatia can count on Real Madrid’s midfield talisman Luka Modric, named man of the match three times in Russia, but his teammate Andrej Kramaric says England’s lack of superstars is what makes them a cohesive unit. “England was one of the favorites for me for the tournament because they have a young and hungry team with no big, international stars, so it won’t be easy for us.”

Croatia could well be battling fatigue and injuries after a strength-sapping penalty shootout to edge out host nation Russia on Saturday.

Goalkeeper Danijel Subasic and right-back Sime Vrsaljko, who both picked up an injury against Russia, and center-back Dejan Lovren were all absent from the part of the session open to media.

Croatia excluded former international Ognjen Vukojevic from their delegation on Monday for posting a pro-Ukraine video clip following the win over Russia. He was also fined by FIFA. Defender Domagoj Vida escaped with just a warning from FIFA, which bans political statements, for also appearing in the video and shouting “Glory to Ukraine!”